Dua Lipa and boyfriend Anwar Hadid are self-isolating during this coronavirus pandemic! 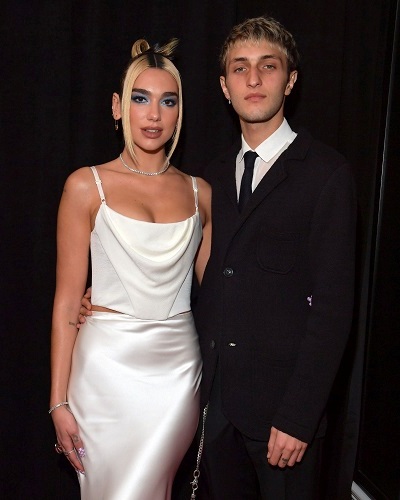 Dating and married couples are self-isolating together due to the coronavirus pandemic. Singer Dua Lipa and her new boyfriend Anwar Hadid are also together in this self-quarantine. Dua had given her fans an insight into her life with Anwar.

On 9 April 2020, singer Dua Lipa, 24 posted a series of photos of her and Anwar in self-quarantine onto her Instagram. She captioned it:

“Our week in pictures so far,”

She also gave further insight into her life with Anwar. Dua showed off her yellow nail polish in one photo. She captioned it:

“Addicted to my new headband … perfect for self-isolation hair + did my own neon gel mani!!!!,”

Earlier, she had spoken on Capital Breakfast Show and revealed that she is safely self-isolating with Anwar, 20. She added that she was sequestrated in a random Air B&B room in London. They were in a rented place because her flat had got destroyed by the renovations carried out at her neighbor’s flat. Dua also had displayed her kitchen skills on her social media. They were enjoying an octopus dish and a fruit.

The Grammy award winner singer Dua Lipa started dating model Anwar Hadid last year. And in August 2019, they made their relationship official on Instagram. That year in spring, the couple was spotted sitting together on the front row of London Fashion Week.

After this, the couple walked together the red carpet at the American Music Awards which was held in November 2019. And since then, the duo had been spotted on several occasions and events. Their relationship is going strong and also in quarantine. Earlier this month, Dua had also appeared on Good Morning Britain and explained:

“My boyfriend and I are quite used to making anywhere a home. We travel a lot, so this is fine,”

“It’s been really, really good. We’re good at doing our things, then coming together when we want to watch a movie, or play a game, or do some painting, or go on our one daily walk.”

Additionally, when a bit free, the couple also shows off their mismatched special outfits for the quarantine. They have also turned their flat into a makeshift salon. They also admired the pink super moon and also suggested their fans ways to keep sane during the social distancing.

Dua’s friend Pixie Levinson tried to make the couple smile during this dark time by giving them a HAPPY PACK full of pictures of family and friends.

Prior to dating each other, both Dua and Anwar were in some past relationships. Anwar was in a relationship with actress Nicola Peltz but they split in May 2018. Later for a brief time, Anwar was linked romantically to Kendall Jenner. On the other hand, Dua was dating Isaac Crew for 5 years but the relationship was a rocky one and of the on and off type. But they ultimately split in June 2019.

A Short bio on Dua Lipa

Dua Lipa is a British singer, songwriter, and model. She came into the spotlight after she launched her debut album. Moreover, two singles ‘Be the One’ entered in the UK top-10 single as ‘New Rules’ became the UK number-one single.

Additionally, she has also won several awards for her achievements such as MTV Europe Music Awards in the category of Best New Act, BBC Radio 1’s Teen Awards for best single, and much more. More Bio…

Rihanna dispatches a ventilator for her father Ronald Fenty when he got infected with coronavirus!
Tags : Model Singer Songwriter