Duane Chapman is a bounty hunter, television personality of the TLC's reality sho, Dog the Bounty Hunter. Duane was married to Beth Chapman who died due to throat cancer. 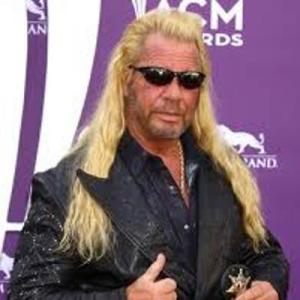 I love what I do. I love to capture the guy. I love to tell the victim 'Don't worry anymore. They're in jail.' And this is my way to heaven. This is my way to contribute to America what I know how to do best, and that's chase down the predator

The closest thing to hell on earth in prison. It's the worst experience I've ever had in my life. Besides death

I've always taken pride to be the white guy that can talk to the black people, that can refer to them truly as a brother from a different mother.

Previously, he was married to wife Beth Chapman on May 20, 2006, at Hilton Hotel, Waikoloa Village in Hawaii, United States. They were happily married and have a healthy relationship. The couple was also blessed with two children named Bonnie Chapman and Garry Chapman. Unfortunately, Beth died in June 2019 due to throat cancer.

His first relationship was, when he was a teenager and he used to date his high school girlfriend Debbie White with whom he has a son, Christopher Michael Hecht. This man was married five times in his life. He married La Fonda Sue Honeycut in 1972.

They were blessed with two children, Duane Lee Chapman II, and Leland Chapman. They remained together for five years and got divorced in 1979.

After ending relations with his first wife, he married Anne M. Tegnell in 1979. They had three other children together; Wesley Chapman, Zebediah Duane Chapman, and J.R. James Chapman. The couple divorced in 1982.

Afterward, Duane married his girlfriend, Lyssa Rae Brittain in 1982. They were blessed by three children together, two daughters named Barbara Katie Chapman and Baby Lyssa Rae Chapman and one son called as Tucker Dee Chapman. However, he got separated from Lyssa in 1991.

Who is Duane Chapman?

Duane Chapman is an American television personality, bounty hunter as well as a former bail bondsman. Chapman is best known as Dog from the reality show Dog the Bounty Hunter.

Duane is of mixed descents of German, English, Danish, distant Swiss-German ethnicity. He is American by nationality.

As a teen, he was tried and convicted of First Degree Murder. This happened during the year 1976. The judgment was expressed for him to get detained for most extreme 5 years inside the correctional facility of Texas. He was additionally sentenced to serve Texas State Penitentiary for a year and a half during his jail time.

In 2004, Chapman’s celebrity status grew when he became the subject of an A&E television series, Dog The Bounty Hunter. The show was on air for eight seasons and was canceled in 2012. Moreover, he had a new show debut on CMT titled Dog and Beth: On the Hunt in 2012.

Chapman published his autobiography, “You Can Run But You Can’t Hide” in 2007. The book debuted at #1 on the New York Times Best Seller list. In 2010, he published his second book. “Where Mercy is Shown, Mercy is Given.” He then appeared on the shows ‘Take This Job’ and Dominick Dunne’s ‘Power, Privilege, and Justice’.

In April 2013, Duane, his wife Beth Chapman and his son Leland featured on the CMT reality show called Dog and Beth: On the Hunt.

He has a net worth of $6 million, but his annual salary is unknown.

Duane was rumored to be cheating his then-wife Tawny Marie Chapman with Beth Smith in the year 1990. He was caught in quite a scandal when his ex, Debbi, committed suicide and he had no idea that he was the father of the baby with her. This child was Christopher and later on, after many years Christopher finally reunited with his father.

Controversy hit Duane part of the way through season 4 after an audio tape was released where Duane Chapman over and again utilized a racial slur while on the telephone with his child Tucker. Tucker sold the tape, and the discussion prompted Duane Chapman going on CNN’s Larry King Live to make a statement of regret.

Roy Innis, the administrator on the Congress of Racial Equality, was one of the primary individuals to contact A&E about the tape, asking for the show be crossed out. In any case, Innis met with Duane, and after different expanded discussions, openly expressed that he needed the show back broadcasting live.

Talking about his body measurements, Duane Chapman has a perfect height standing at 5 feet 7 inches (1.7 m) and weighs 91 kg. He has an athletic body with blue eye color and dyed brown hair color.

Also know more about the early life, career, net worth, relationships, and controversies of other actresses, director, producer, and musician including Adam Sandler, Thora Birch, and Vera Farmiga.