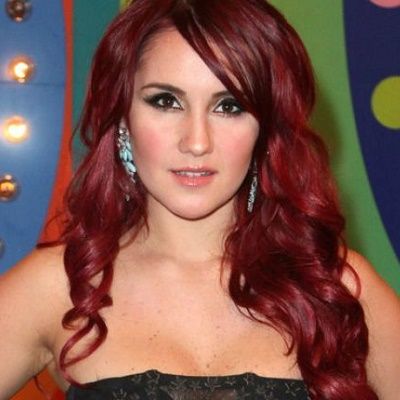 At her wedding, she was wearing long sleeves princess gown. This was a small function that took place in Jojutla, Mexico.

Previously, Maria is also in a relationship with Mexican goalkeeper Guillermo Ochoa. She has dated an author Daniel Habif.

Who is Dulce Maria?

Dulce Maria is a Mexican singer, actress, author, and songwriter. She is best known for her songs La Mejor De Tus Sonrisas, and Prende El Switch.

This singer was born on December 6, 1985, in Mexico City with the birth name Dulce María Espinosa Saviñón. She is the daughter of Fernando Espinoza (father), and Blanca Savinon (mother).

She has sisters named Blanca Ireri and Claudia. Dulce is of German, Native Mexican, and Spanish descent.

Dulce Maria began doing TV commercials from childhood. She was cast in the Mexican version of Sesame Street. She appeared in many commercials during her young age and was also cast in El Club de Gaby. Maria has participated in several specials on the Discovery Kids channel.

Earlier, this singer used to work in soap operas in Televisa. When she participated in a music project Rebelde, She discovered her real talent.
This songwriter joined the Mexican Music Group Kids in 1996. She released her hit single duet with Akon. After 3 years, Maria left the group. She decided to start her own group D&D with her then-boyfriend Daniel Habif. But they split up after recording five songs.

Dulce joined a female Latin pop group ‘Jeans’ in 2000 but left after two years, She appeared in the main role in the 2002 telenovela ‘Class 406’.

Dulce was one of the main characters in Rebelde. After Rebelde launched RBD made of Alfonso Herrera, Maite Perroni, Christian Chavez, and Christopher Von Ackerman.

This group has recorded 9 studio albums and sold over 20 million albums worldwide to date. RBD decided to split up on 2008 Aug 15 and went on the final tour, Gira Del Adios World Tour which ended in 2008.

Maria released a song ‘El Regalo Mas Grande’ on collaboration with Tiziano Ferro and Anahi. In 2009, Dulce signed with Universal Music as a solo artist.
She released her first solo single ‘Inevitable’ on 2010 May 17. Her first solo album ‘Extranjera’ released on 2010, November 9. Dulce announced that Extranjera Segunda Parte would be released on 2011 June 14.

Maria released her third studio album ‘Day‘ on March 10, 2017, and started Day tour promoting the album. She performed in countries including Spain, Mexico, and Brazil.

This singer has also appeared in several films like ‘Inesperado Amor’, ‘Quiero Ser Zied’, ‘El Agente OO-Pz’, and many more.

Dulce Maria has own 35 Awards and 86 nominations. The awards she won includes;

The average salary of this singer is estimated to be  $80,000. Meanwhile, according to some sources, she has an estimated net worth of $12 million.

Dulce was rumored to be pregnant at the age of 22. There was a crazy rumor that claimed this singer was dead by infection of bacteria

Although she is not active on Facebook, there are fan pages made by her well-wishers.