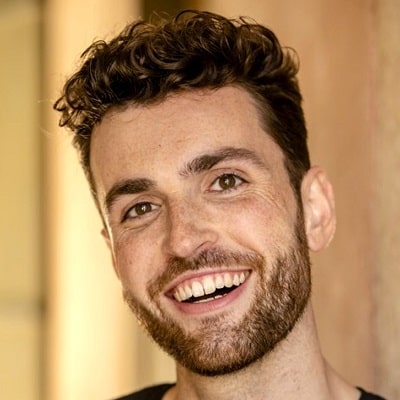 Duncan Laurence might be currently living his single life. He came out as “bisexual” in 2017. He and his friend Gerco Derksen have put an end to their relationship. Duncan announced the news via Twitter. After that, he received a lot of diverse reactions from his followers, which he then reassured his fans. Also, he did not reveal anything about the reason for the relationship break.

Also, he said in an interview, his song Arcade is dedicated to his love which he lost when he was young.

Who is Duncan Laurence?

Duncan Laurence is a Dutch singer and songwriter who caught the spotlight after he won the Eurovision Song Contest 2019 for the Netherlands with his soulful rendition of the song Arcade. He started his career as a singer in 2014. That same year, he participated in the fifth season of The Voice of Holland, finishing one of the semi-finalists.

He was born on the 11th of April 1994, in Spijkenisse, South Holland, Netherlands. His birth name is Duncan de Moor. He was born to parents Petra Aguiar and Cor de Moor. He learned to play the piano at a young age.

Duncan holds Dutch citizenship but his ethnicity a mix of Dutch, German, and Belgian.

He attended the Tilburg’s Rock academy, one of the biggest music schools in The Netherlands from which he graduated in 2017. He also performed in a number of school bands, including his own, The Slick and Suited. The band was formed in 2013 and they also performed at Eurosonic Noorderslag.

He participated in the fifth series of The Voice of Holland in 2014, making it all the way to the semifinals.

He has also written for South Korean duo TVXQ, co-composing the song “Closer” for their 2018 album New Chapter #1: The Chance of Love which peaked at #1 on the South Korean charts.

Moreover, he represented the Netherlands at the 2019 Eurovision Song Contest with the song “Arcade” and eventually winning the competition after 44 years. The last time the Netherlands won was in the year 1975.

He is the first male musician to win the contest for the Netherlands. He released his second single “Love Don’t Hate It” on October 23, 2019, and it was also announced that he signed a deal with Capitol Records.

He has a height of 5 ft. 9 inches and weighs 70 kg. Also, he has dark brown eyes and dark brown hair.

Instagram Model Angela Nikolau taking Selfie Game to the Next level!! Thrilling Pictures To New Heights With Stomach-Churning Poses On Top Of Skyscrapers