Updated On November 27, 2022 | Published By: Rounak Kumar
Share this
In Relation 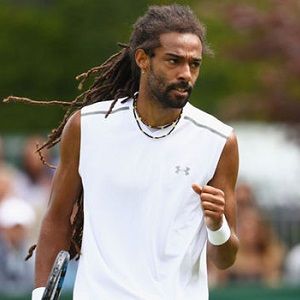 What is the relationship of Dustin Brown?

Dustin Brown has not been married until now. But as of now, he is in a relationship with his beautiful girlfriend named, Dione Gonzales. She is a model who lives in Las Vegas.

Dustin has to travel to different places for his game.

But he manages his time to spend time with his girlfriend.

Talking about Dione, she was once married in 2002 to Jonathan Schaper.

She broke up with her previous husband before starting a career in modeling.

She even has a daughter named, Jordyn from that marriage.

Who is Dustin Brown?

Dustin Brown is a tennis player.

He is also famous for his trick shots. He started playing tennis at the professional level in 2002.

Moreover, he is also known for defeating Rafael Nadal in Wimbledon 2015.

His ethnicity is Germana and he possesses Jamaican and German nationality.

The name of his father is Leroy and his mother’s name is Inge. While Leroy is a native Jamaican, Inge is a native German.

Tennis intrigued him from a young age. So he started playing tennis at the age of five.

Similarly, he also played other sports like cricket, football, judo, and handball.

Although he was born in Germany, he along with his parents moved to Jamaica at the age of 11. Later he returned to Germany at the age of 20.

There is no information regarding his education and other academic facts.

Although Dustin Brown played tennis at an early age, he turned professional in 2002.

It was after he moved back to Germany from Jamaica. From 2002 to 2009, he represented Jamaica.

He won several double titles in Jamaica, Switzerland, Turkey, Spain, and Germany throughout his career. Afterward, he changed his nationality to German in 2010. Altogether, he won 3 singles titles and 16 doubles titles in ITF Future.

Similarly, he won 7 individual titles and 17 doubles titles in the ATP Challenger Tour.

Till now, he has participated in main tournaments like “The Australian Open,” “French Open,” “Wimbledon,” and “US Open.”

He has not won any major tournament yet. But his performance at the 2015 Wimbledon shocked the world. He beat the legendary tennis player, Rafael Nadal in the ‘2014 Halle Open’ and ‘2015 Wimbledon’.

How much does Dustin Brown earn?

Apart from prize money, he also receives money from endorsements and sponsorships.

As per the sources, the average salary received by a musician is around $47k-$208k per year.

Dustin is often criticized for his ill-temper.

Additionally, critics throwing negative comments for a bad game are normal to him.

Other than that, he is away from any controversy and rumors.

What are the body measurements of Dustin Brown?

Dustin Brown has an athletic body with a height of 6 feet 5 inches. Similarly, his weight is around 78 kg or 172 lbs.

His dreadlock hair color is brown and his eye color is light brown.

Moreover, he is followed by more than 140k followers on Facebook.