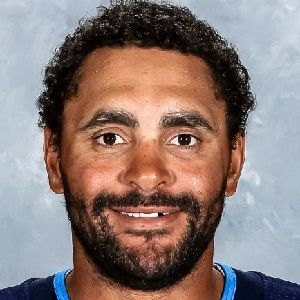 Dustin Byfuglien is a married man. He is married to Emily Byfuglien. The couple lives in Winnipeg, Canada

They have three children. One is their daughter,Kira and other two sons are Kai and Theo.

Who is Dustin Byfuglien?

Dustin Byfuglien is a professional ice hockey player from Minneapolis, Minnesota. He is known as the defense and forward of the Winnipeg Jets of the National Hockey League (NHL). He is also alternate captain of the team. He also played for other renowned teams like Chicago Blackhawks and AtlantaThrashers.

Dustin was born on March 27, 1985, in Minneapolis, Minnesota. He is the son of Cheryl Byfuglien and Rick Spencer. Rick is an Afro-American while Cheryl is of Norwegian and Swedish descent. The couple never got married. He was raised in Roseau, Minnesota and his stepdad Dale Smedso is a former ice hockey player while his biological father played football. Dustin was exposed to ice hockey at a young age and he instantly loved the sports.

Byfuglien never received any formal education. He was ineligible to play at the Roseau High School academically so he moved to Warrenville, Illinois to play AAA under-18 hockey and then to Canada to play Junior Hockey.

Byfuglien played junior hockey with teams of Western Hockey League (WHL) like Brandon Wheat Kings and Prince George Cougars. In 2003 he was drafted by the Chicago Blackhawks. He played defense at the beginning of his career and then expanded his periphery being the right wings of the team.

In 2010 Blackhawks traded Dustin to the Atlanta Thrashers. Initially assigned at the defense position, he quickly was appointed the alternate captain of the team within few months. He recorded a slap-shot at 102 mph in 2011 at the 2011 All-Star Game’s Skill Competition.

Dustin also played at the World Cup of Hockey (WCH) in 2016 representing America. The American team was seventh in the competition. He recorded a total of one point and one assist and didn’t score any goals in the WCH.

Dustin Byfuglien: Salary and Net Worth

The salary and net worth of this Ice Hockey Star are under review and will be updated as soon as possible.

There are no controversy or rumors about this ice hockey player to this day.

Dustin is six foot and five inches tall. He weighs 120 kilos. He has black hair and the color of his eyes is black. Other details about his body measurements like the width of chest, waist and biceps etc are unknown.

Dustin Byfuglien is not active on any social media.