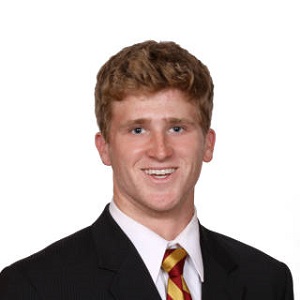 Dustin Hopkins is a married man. He is married to Gabrielle Hopkins, who was his longtime girlfriend. She is a former cheerleader for FSU. She was a cheerleader for his team. This how they were introduced. In May 2014, Dustin proposed to her and she said yes. Soon, after they were engaged, they tied the knot.

In 2016, there was news that Gabrielle is pregnant. On 14 March 2017, she gave to a beautiful baby boy whom they named Wake Steele Hopkins. The news was shared by them on their social media handle, Instagram, and Twitter.

Who is Dustin Hopkins?

Dustin Hopkins is an American football player. He currently plays as a placekicker for the Washington Redskins of the National Football League (NFL). He played college football at Florida State University. Hopkins was drafted by the Buffalo Bills in the sixth round of the 2013 NFL Draft.

Hopkins was born on October 1, 1990, in Austin, Texas, USA. His nationality is American and he is of Native American ethnicity.

He is the son of American parents Jim Hopkins(father) and Karen Hopkins(mother). There is no information on his siblings and childhood.

He completed his high school education at Clear Lake High School. After that, he attended Florida State University for further studies. He was recruited by Florida State when then Seminoles special teams coordinator Jody Allen watched a high school game film of Hopkins’s kickoffs.

Dustin began his football career at Clear Lake High School. After that, he played for the Florida State University team. While playing against Wake Forest, Hopkins broke the previous FSU record with his 109th point after try (PAT) in a row in 2011. In November 2012, he set the NCAA Division I FBS record for career points scored by a kicker at 442 points.

Dustin began playing as a professional footballer in 2013. He was drafted by the Buffalo Bills in the sixth round, 177th overall of the 2013 NFL Draft. On May 10, 2013, he signed a four-year contract with the Buffalo Bills. He left the club in 2014 and signed to the New Orleans Saints practice squad on December 17, 2014. Saints released him in September 2015. After that, he was signed by the Washington Redskins on September 14, 2015. Since then, he plays for the Redskins.

Dustin Hopkins: Salary and Net Worth

Currently, there are no desperate rumors regarding his personal and professional life. It seems he is doing best job without harming others and has been a straight person in his life, for which he has not been in any controversy yet. He is currently focusing on his work and he is loved by everyone for his hard work and passion for the game.

Dustin has a height of 6 feet and 2 inches and weighs 91 kg. His hair color is red and his eye color is blue. His shoe size is unknown.