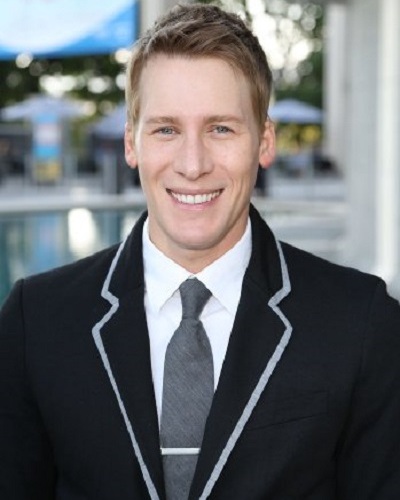 Dustin Lance Black is the gay partner of Tom Daley. There was a row that erupted with British Swimming regarding the access of their baby son’s to poolside events. Now Dustin has slammed the organizers at Diving World series for telling lies.

There was a war on the social media between British Swimming and Tom Daley and his partner Dustin. It was pertaining to the access of their baby son’s to poolside events.

Dustin accused the governing body of creating a foul environment for families, at their diving events. He felt so since he and his child were unable to watch the Olympic diver Tom and Grace Reid win the gold in the mixed synchro competition at the Diving World Series in London. He uploaded a series of tweets related to this matter on Sunday 19 May 2019. Dustin  said:

“some rather cruel, thoughtless @britishswimming organisers have created a situation that is neither safe nor welcoming for our family”.

The reason for Dustin’s anger

Dustin did not clearly mention in his posts the exact reason for the feud and his anger. There was a statement issued shortly afterward by the British Swimming which hinted that the anger and fight were due to the fact that the couple was not allowed to get the baby buggy onto the concourse reserved for the event. The statement of British Swimming read:

“British Swimming is extremely disappointed that Tom’s husband felt that he couldn’t be at the London Aquatic Centre to support Tom yesterday.”

“The London Aquatic Centre’s policy is not to allow buggies onto the spectator concourse for health and safety reasons and British Swimming supported this policy to ensure the safety of everyone attending this exciting event.”

Dustin slams back at British Swimming

Dustin reportedly shot back. He was not happy with the reply and statement from British Swimming. He revealed that the topic of contention was not the pram at all. Dustin began a fresh array of tweets on Monday 20 May 2019. Dustin clarified:

“I never asked to bring one in, and we certainly had no interest in being poolside with one. Anyone there plainly saw that our son was on my lap. This pram story is a lie,”

He went on to add that he was ready on Sunday to resolve the matter in private with the British Swimming but they did not give him the time and ear. He wrote:

“And within the hour the CEO of @britishswimming put out a press release that is an absolute misrepresentation of what occurred. Or as my mom would call it: a lie.”

There has yet been no reply from the association. Tom’s win fell in the back as this feud took the front seat and overshadowed his success.

Additionally, Dustin told BBC Sport that he heard that people were complaining when he took his son Robbie in a pram to the disabled part of the event. He felt that the issue had sorted out but later he came to know that he and Robbie were out of the event.