Dylan Barbour is a television personality and entrepreneur.

Dylan Barbour is already taken. He is engaged to Hannah Godwin who is a content creator, model, and social media personality.

The couple first met in the reality show Bachelor in Paradise season 6 where they fell in love with each other.

On September 17, 2019, the pair get engaged during the final season of the show.

After getting engaged at the final of the season, the lovebird went into a long-distance relationship between San Diego and Los Angeles.

Later, the pair celebrate their engagement in February 2020 in Hollywood Hills with family and fellow Bachelor alumni.

Also, the couple has bought a house together in San Diego. Maybe the loving couple going to marry soon. 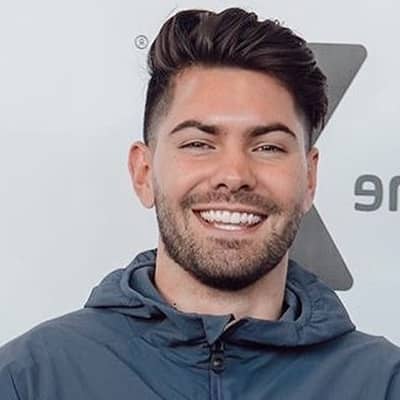 Who is Dylan Barbour?

Dylan Barbour is an American television personality and entrepreneur. He rose to fame after appearing on season 6 of Bachelor in Paradise.

The reality tv personality was born on June 16, 1994, in San Diego, California. He is of American citizenship and belongs of Caucasian descent.

Talking about his family, his father passed away after succumbing to cancer in July 2018. Also, he often shares remembrances of his father via Instagram.

Whereas his mother, Cassandra Barbour is a businesswoman. Also, he has a brother named Justin Barbour.

Dylan completed his high school at Chadwick School and graduated from Williams College with BA in English in 2016.

Also, he attended the London School of Economics and Political Science.

After graduation, Dylan worked as an investment banking summer analyst. In 2016, he served as an Associate at Morgan Stanley in Palo Alto, California for two years.

He earned CFA level 1 and Level 2 before his appearance in reality shows. Currently, he is the co-founder and COO of a Fitness App named Vizer which is created along with his cousin, Sam Pintzopoulos in 2017.

Apparently, he doesn’t seem in any sorts of rumors and scandals that create headlines in the media.

On May 5, 2020, Dylan started a campaign, #DateDylansMom to find someone to date his mother via Instagram.

On the post, his former co-star Tyler Cameron suggests his father, Jeff Cameron for Dylan’s mother. However, they conclude in a joke but there is a chance that both would be half-brother.

Dylan earns a self-sufficient net worth of around $750 thousand – $ 900 thousand throughout his profession as a businessman.

Likewise, his monthly salary is around $63 thousand – $75 thousand approximately.

Being a fitness instructor he has an athletic body type and has a killer smile that can easily attract girl’s hearts.

Moreover, he has two tattoos on his body that one is on his ankle a plan tree, and another one a heart with roses on his chest for his parents.