Dylan Bundy is in a relationship with Caitlin Smith since 2016 approximately.

Caitlin and Dylan are seen on and off in their local haunts like picture-painting competitions, go for a wee bit of golf or go visiting the Lincoln Centre.

However, Dylan and Caitlin prefer going out hunting and fishing more often than most. 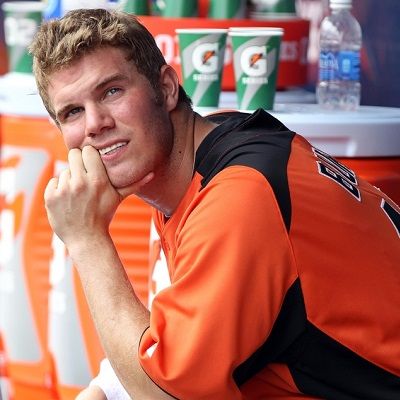 Who is Dylan Bundy?

Dylan Bundy is an American baseball pitcher for the Los Angeles Angels of the MLB. Throughout 2019, the professional baseball player, Bundy pitched for the Baltimore Orioles.

On Wednesday, 4th December 2019, The Los Angeles Angels acquired right-hander Dylan Bundy from the Baltimore Orioles in a trade.

Dylan Bundy was born Dylan Matthew Bundy on 15th November 1992 in Tulsa, Oklahoma. Bundy has an older brother Bobby, another baseball pitcher in the family.

More about Bobby Bundy- Bobby attended Sperry High School and he pitched for his school. Bobby was previously drafted by the Orioles in the 2008 Major League Baseball draft. Consequently, he played the minor leagues for nine seasons.

Dylan was educated at Owasso High School, Owasso, Oklahoma and so did his baseball career. The Baltimore Orioles selected him in the 2011 Major League Baseball draft. After his injury in 2012, Bundy did not return to the major league until 2016.

On 15th August, Bundy signed the contract with Baltimore Orioles and was added to the 40-man roster.

2012, April 6th, his professional debut in the Major League Baseball for the Baltimore Orioles with the Single-A Delmarva Shorebirds pitching against Asheville Tourists.

2012, May 23rd, Bundy was promoted to top-Class A Frederick Keys and named to appear on the 2012 All-Star Futures Game.

2012, September 23, Bundy made his MLB debut against the Boston Red Sox.

2012, September, he appeared against the Blue Jays.

2013, June 27th, Bundy underwent the Tommy John Surgery- his return was expected in 2014 January. And on 2015, July 29th, he was totally shut down because of calcification in the back of his shoulder. His tentative date of return was 2015 September.

2016, April 7th, freed from the Minor League choices, Bundy hit the ground running and pitched an inning against Minnesota Twins.

2017 July, despite a rocky start with the struggling Orioles, he had a better second time against the Cleveland Indians.

2017, July 27th, Bundy was up against the Colorado Rockies followed by the Texas Rangers.

In this way Bundy completed two-full years in the Major Leagues having pitched in 36 games with 14 starts, pitching to a 4.02 ERA, going 10-6, and struck out 104 batters. Bundy led the Major Leagues in steals of home allowed, with two. In his first start back from the All-Star break, Bundy set a new high in the innings he pitched in a season.

2017, August 1st, he went eight innings against the Kansas City Royals and received one unearned run in the Orioles 7-2 victory. This was the longest outing in Bundy’s career to date.

2017, August 29th, was his first complete-game shutout against the Mariners- he allowed just one hit!

2018, May 8th, Bundy set a Major League Baseball record against the Kansas City Royals- a total of 5 hits, 7 runs, and 2 walks. He gave the home runs to Jorge Soler, Mike Moustakas, Salvador Perez, and Alex Gordon.

2018, June 26, Bundy was placed on the disabled list with an injury to the ankle.

On July 13, 2019, Bundy was placed on the disabled list with right knee tendinitis.

Bundy has won 38 games in the last four seasons, including 13 wins in 2017 during his first full season as a big-league starter. Bundy went 15-30 with a 5.13 ERA and 70 home runs allowed during the Orioles’ past two miserable seasons, but he started at least 28 games in three straight years while averaging 168 innings in Baltimore’s rotation.

In 2019, on 4th December, Dylan Bundy was traded by the Baltimore Orioles to the Los Angeles Angels in exchange for four minor leaguers.

Dylan Bundy’s departure has the Orioles all teared up. The general manager at Baltimore, Mike Elias reportedly said that ‘it is a bittersweet thing, parting with Dylan,” Elias added. “He has done a lot for the Orioles. He has laid it on the line at all times for the Orioles and always taken the ball, and this dates well back beyond my short time here. We’re going to miss him, and we have a hole in our rotation to fill.’

Dylan Bundy was the only player to win the Gatorade consecutively for three years.

2009, Gatorade State Player of the Year

2010, Gatorade State Player of the Year

2011, Gatorade State Player of the Year

2011, The USA  Today Baseball Player of the Year

2011, Louisville Slugger Player of the Year

You may also want to check out how Dylan Bundy heats up the game going despite a rocky start. Enjoy!

His total earnings in 2018 amounted to $2.8m US. Accordingly, Bundy’s new Los Angeles owner Arte Moreno claims that he is willing to increase Bundy’s payroll significantly this year.

Dylan is 6 ft 1 in tall and weighs 90 kg. Dylan’s tendonitis is a cause for concern among his fans. Nevertheless, his agent is Jay Franklin, BBI Sports Group.

You may also want to know about other baseball players such as Tommy Edman and Tim Salmon.