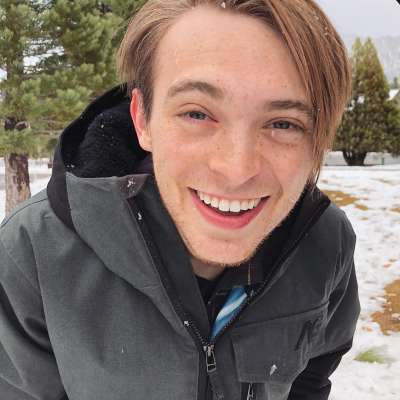 Actor, Dylan Riley Snyder is blissfully living a married life with Allisyn Ashley Arm. Allisyn is a well-named American actress who is famed for her role in Dive Olly Dive!, Sonny with a Chance, So Random, and AwesomenessTV.

The couple turned their bonding into married on 18 September 2019 and announced it on social media. Their wedding took place in Malibu, California. They tied the knot in an intimate ceremony mentioning the boy was romantic.

Their wedding took place on a boat with their close family and it went like a real-life fairy tale. Allisyn mentioned that their ceremony was going to be very emotional since Dylan had lost his father.

Dylan also shared his happiness on an Instagram post mentioning their intimate ceremony. Currently, the couple is joyfully enjoying their married life.

Who is Dylan Riley Snyder?

Dylan Riley Jacob Snyder, popularly known as Dylan Riley Snyder is a well-recognized American actor, singer, as well as a dancer. Snyder is best famed for his role on Kickin’ It(2011), Better Call Saul (2015), and Flock of Four(2017).

Dylan Riley Snyder was born on 24 January 1997. At present, his age is 24 years old. Likewise, his birthplace is Tuscaloosa, Alabama, the USA.

Dylan is the son of his father, Les Snyder whereas his mother is Ashley Snyder. Moreover, he has an older sister as well, Cassidy Snyder who is a named actress and singer as well.

Talking about his nationality, Snyder holds an American identity whereas his ethnicity is mixed(Caucasian and Hispanic).

Regarding education, Riley has not disclosed his educational details. He was very passionate about acting, singing, and dancing early from his childhood. He started performing from the early age of four. local directors, actors, and writers were highly impressed by his performance.

Earlier, Dylan Riley Snyder started performing and appearing in several theatre programs from his childhood. Professionally, he became part of Disney’s Broadway musical adaptation of Tarzan and started learning. Riley made his professional debut on Broadway being a Young Tarzan in September 2006.

Soon, he started to learn in musical theatre and joined ballet lessons. At that time, he started working as a model and performed in print advertorials of H&M and Lord & Taylor. He has done several voicing as well such as the role of Griffin and Hound Dog in Nickelodeon’s animated series named Wonder Pets.

Dylan made his movie debut playing the role of Leo Amatog in the short film Valley of the Moon in February 2009. The same year, he emerged as Timmy Maplewood in the dramatic comedy, Life During Wartime. In November 2009, Snyder shifted to the New York stage performing Young Horace Robedaux in The Orphans’ Home Cycle.

Likewise, the multi-talented star performed his first comedic role co-starring as Milton Krupnick on the Disney XD original comedy series, Kickin’ It is the summer of 2010. The series premiered in June 2011 and son became Disney XD’s number 1 original series in the network’s history.

Afterward, Snyder served on his wife Allisyn Ashley Arm‘s YouTube series Astrid Clover featuring the role of Boon Guy. The star also featured Milton in Mamaboy in 2015 which gained him high popularity with the public.

It is reported that Dylan Riley Snyder has an estimated net worth of $1 million. Further, he has been involved in various commercial advertisements and brand endorsements as well.

Multitalented personality, Dylan RIle has never been part of any controversial matter or rumors till now.

It seems that the star prefers enjoying his personal life and does not want to merge it with his professional life.

24 years old juvenile actor, Dylan has a handsome look as well as an admirable personality. He stands at a height of 5 feet 10 inches. Also, he has a balanced body weight of 69 kg.

Furthermore, Snyder has blue eyes whereas his hair is light brown.

Nevertheless, the name has never mentioned other physical details in the public yet.

About his social media presence, Dylan Riley Snyder is an active personality on social media. Dylan has more than 240k followers on his official Instagram account @dylansnyder.

He is also active on Twitter with around 178.3k followers.

Moreover, Riley is also available on Facebook with nearly 181k fans and supporters.