Eamonn Holmes is a married man. He exchanged his vows with a television presenter Ruth Langsford 0n 26 June 2010 at Elvetham Hall, near Hartley Wintney, Hampshire. Holmes and Ruth sold exclusive rights of reporting their wedding ceremony and the reception to Hello! magazine.

They began dating each other in 1997. This couple together has a son named Jack Alexander born in 2002.

Previously, Eamonn was married to Gabrielle in 1985. This couple together has three children, Declan, Rebecca, and Niall. Eamonn and Gabrielle eventually divorced in 2005. 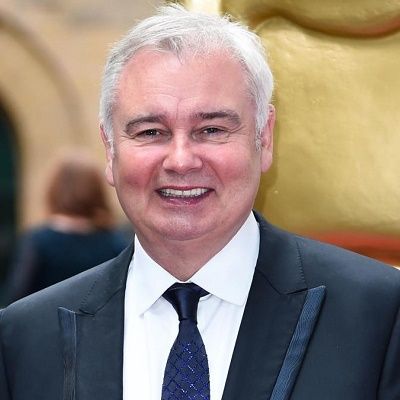 I think I probably killed off the beauty contest on TV.

Who is Eamonn Holmes?

Eamonn Holmes is an Irish Journalist and Broadcaster. He is best known as one of the ‘best live television presenters in the country’.

He is also an author and has written books like This is my life and The Manchester United Book of Lists.

This journalist was born on December 3, 1959, in Belfast, Northern Ireland. He belongs to English descent.

His father’s name is Leonard and his mother’s name is Josephine. He has four brothers named Conor, Colm, Leonard, and Brian respectively.

Earlier, Eamonn Holmes worked for a Dublin-based business magazine before entering broadcasting. He joined Ulster Television as a host and reporter for the station’s Farming Ulster program in 1979. Afterward, he assists in covering sporting events in the province.

He moved into news and current affairs reporting in 1982 to anchor Ulster Television’s flagship Good Evening Ulster program. Eamonn was the third choice to present the program.

In addition to his news and current affairs role, he has also hosted other Ulster Television productions, including the Miss Northern Ireland gala. He won the Hometown Radio Award with Ulster Television.

Homes was also the presenter of ITV’s coverage of the Phil Taylor vs.. Raymond van Barneveld showdown at the Wembley Conference Center. On 1 January 1993, he started hosting the show at GMTV. Between 2001 and 2007, Eamonn presented the BBC National Lottery game show Jet Set.

In 2005, this journalist left GMTV and joined Sky News to present the new look ‘Sunrise’ program. In March 2014, he defected to ITV and was replaced by Isabel Webster. Later, Eamonn announced his departure from the program after eleven years in September 2016.

Earlier, he presented the BBC quiz show SUDO-Q, the US game shows The Rich List, co-presented The Feelgood Factor. He guest presented an episode of Have I Got News For You in 2010, which appeared on Lily Savage’s Blankety Blank. This broadcaster has also made regular appearances on Big Brother’s Bit on the Side.

Eamonn also writes a column for The People Newspaper. In May 2006, his autobiography This is My Life was released.

Eamonn received £2.8 million for hosting Sky News’ Sunrise and ITV’s This Morning saw him as the highest-paid TV star of 2011. Meanwhile, according to some sources, he has an estimated net worth of $5 million as of 2022.

He was accused of being opposed to LGBT parenting. On 29 August 2001, American illusionist David Blaine appeared on the show and this was the most awkward moment of his professional career and one of TV’s bloopers when Blaine refused to speak and gave Holmes the evil eye.

In October 2011, while presenting This Morning he described singer Jonathan Wilkes as ‘retarded’ on air. Later he apologized after complaints and calls for him to be sacked.