Echo Kellum relationship status is certainly not single. He is datingLyndsi LaRose. In July 2017, when Echo shared on his Twitter post that when he will be hosted Los Angeles Ronald McDonald House Gala, Lyndsi was at his side.

Also, there is a cute picture where he is seen pecking her cheeks and then shared on their Instagram account. They are happy  indeed! 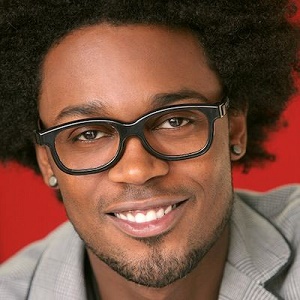 Who is Echo Kellum?

Echo Kellum is an American television actor, voice actor and comedian. He is famous for his roles on a sitcom Ben and Kate as Tommy, on Sean Saves the World as Hunter, on Arrow as Curtis Holt.

August 2019: A mysterious post on Instagram let out that it looks like Team Arrow may be getting one of its members back in the coming season. Mister Terrific, or Curtis Hold  Echo) who left the show after the events of “Star City Slayers,” may reappear again.

He is working on his hip-hop album. He is also interested in writing and directing.

Echo Kellum was born on 29 August 1982, in Chicago, Illinois in a middle-class family of Afro-American ethnicity.

He has been interested in drama since his early age and is a graduate of The Groundlings, I.O. West, and the Upright Citizens Brigade.

He began his career at an early age by playing in commercials and plays. He took part in his first regional theater tour at the age of only 13.

Echo moved to Los Angeles to pursue his acting skills and also make a living. His breakthrough role was Tommy in Ben & Kate (2012-2013)  But the show was canceled just after one season.

He was then cast in NBC`s Sean Saves the World as Hunter the following year. He joined the cast of Arrow in the year 2015 as Curtis Holt in a recurring role.

He was promoted to regular cast in the fifth season of Arrow by CW. Curtis Holt. This series is based on the DC character Mister Terrific. In 2017 appeared in the movie Girlfriend`s Day as Madsen.

Though it was announced on 11th February 2019, that Mr. Terrific aka Echo will soon exit the series, August updates however affirmed he may be back on board.

Some of Echo’s Movies and Voice Roles of note are:

In 2013, Echo made an appearance as a ‘smart employee’ in a commercial for UPS that was titled Returns I’m Not Happy /I’m Happy.

Just plain gossip- It is believed that Echo went straight for the marriage vows with Brandy Brooks and have 2 children.

You may want to read more about the biographies, facts, single and married status of  Paul F. Tompkins  and Amy Poehler