Ed Speleers is a well-recognized English actor and producer. He is married to Asia Macey. The duo welcomed their first child as a son named Jude Speleers.

Talking about his love life, Ed Speleers is married to his long-term partner, Asia Macey. Asia is a well-named actress known for working in the costume and wardrobe department on two movies, The Best of Men and Jack the Giant Slayer.

However, they hide their wedding ceremony publicly as later they stated they are married in the public. The duo welcomed their first child as a son named Jude Speleers in 2015. Likewise, their second child was born as a daughter in 2021. 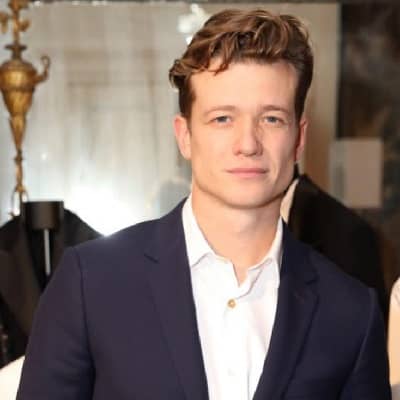 Who is Ed Speleers?

Moreover, he has been nominated for both the Saturn Awards as Best Young Actor, and the British Academy Film Awards, for a short film he co-produced.

Ed Speleers was born on 7 April 1988. At present, his age is 33 years old. Likewise, his birthplace is Chichester, West Sussex, England.

Ed is the son of his father, John Speleers whereas his mother is Gill Speleers. Moreover, he has two half-brothers.

Talking about his nationality, Speleers holds a British identity whereas his ethnicity is Caucasian.

Regarding education, the star performed in school productions such as A Midsummer Night’s Dream and Richard III. Later, he studied at Eastbourne College in Sussex.

Professionally, Ed started his debut career in 2006 in the lead role in 20th Century Fox’s screen version of Christopher Paolini’s hit book, Eragon. He also auditioned for different roles such as Peter Pevensie in The Chronicles of Narnia: The Lion, the Witch, and the Wardrobe. Next, he played in the British primetime series, Echo Beach in 2008.

Additionally, he appeared in the comedy Moving Wallpaper and an episode of Moving Wallpaper: The Mole. In the next year, Speleers featured in the role of Jason Grint in the made-for-television fantasy-adventure film, Witchville, and starred in director Aimee Powell’s short film Deathless.

In 2012, the English actor performed as Jamie in Andy de Emmony’s comedy horror film, Love Bite. He was also cast in the film, A Dead Man in Deptford based upon Anthony Burgess’ novel of the same name, but the film was never completed.

Ed in advance featured in a small role in the BBC’s historical drama mini-series, Wold Hall as Edward Seymour, brother of Henry VIII’s third wife Jane Seymour. In 2016, the star emerged in a small role of Slean in ITV’s epic fantasy drama television series, Beowulf: Return to the Shieldlands.

Apart from acting, Ed also featured as a producer on Barnaby Blackburn’s short film Wale. It was nominated for a British Academy Film Awards in 2018 in the Short Film category.

A talented English actor, Speleers has earned a handsome amount of money from his profession. He has been active in his profession from the year 2006 till the present.

It is reported that Ed Speleers has an estimated net worth of $4 million.

Ed has never been part of any controversial matter or rumors till now. The star has been preoccupied with his professional and private life.

It seems that Speleers prefers enjoying his personal life and does not want to merge it with his professional life.

33 years old star, Ed has handsome and an admirable personality. He stands at a height of 5 feet 10 inches. Also, he has a balanced body weight of 74 kg.

Furthermore, Speleers has hazel eyes whereas his hair is blonde. His body measurement is 42-34-15 inches(chest-waist-biceps) respectively.

Nevertheless, the celebrated star has never mentioned other physical details in the public yet.

Regarding his social media presence, Ed Speleers is an active personality on social media. Ed has more than 97.9k followers on his official Instagram account @edwardjspeleers.

Moreover, Speleers is also available on Facebook with nearly 14k fans and supporters.