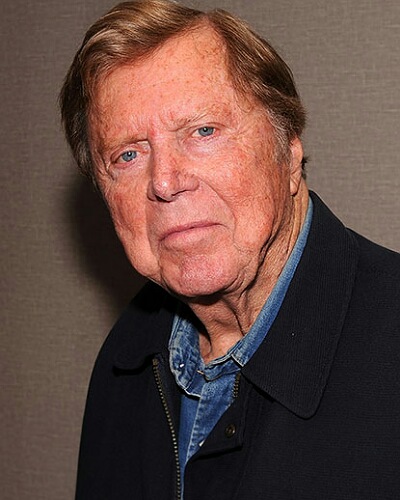 He was the best friend of news anchor Logan Byrnes. He was his father Edd Byrnes who is no more. Edd died at the ripe old age of 87 at his home in California. Logan took to Twitter to announce the sad news.

Logan Byrnes announces the death of his father Edd Byrnes

News, anchor took to Twitter to announce to the world and his fans that his father actor Edd Byrnes has died. For Logan, Edd was his best friend. Logan tweeted:

“It is with profound sadness and grief that I share with you the passing of my father Edd Byrnes. He was an amazing man and one of my best friends.”

“His is the story of an ambitious young kid who, in his 20s drove out to Hollywood from New York City with a few hundred dollars and a dream of making it big in the entertainment business.

“He soon landed a starring role on the wildly popular TV series 77 Sunset Strip as the cool-talking Kookie. He went on to star in dozens of motion pictures and television series popular around the world, including playing the suave and debonair Vince Fontaine in Grease.”

Edd Byrnes and his breakthrough role

The actor Edd shot to fame when he played Kookie in the drama 77 Sunset Strip in the late 1950s. Kookie was a smooth parking valet who becomes a private detective and won the hearts of millions, especially the young audience.

Kookie’s character used to comb his hair constantly and had a slick style. This character inspired Leonardo DiCaprio’s character, Dalton, in the award-winning film by Quentin Tarantino-Once Upon A Time In Hollywood.

Quentin Tarantino talks about the character

Talking about the role of Dalton, last summer Quentin had said:

“They spent their careers running pocket combs through their pompadours.”

Click to read more on An update! The death of Chef Gary Rhodes was due to a subdural hematoma!

Edd had a contract with Warner Bros and hence could not take up a vital role in the 1960 movie Ocean’s 11 with the Rat Pack. Realizing that his choices got limited due to the contract, Edd came out of it.

He did more films and then in the late 1960s returned to television. Edd was the host of the pilot program of the popular game show Wheel of Fortune. But was not selected for a permanent host position.

Click to read more on Womanizer Quentin Tarantino, who’s had affair with many beautiful celebrities is finally engaged to Daniella Pick