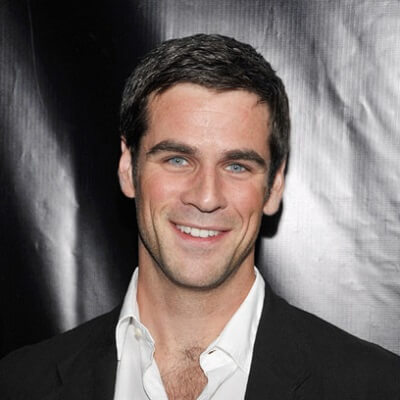 Everybody wants to get along with everyone else in the sandbox. I'm that kind of kid, you know what I mean? That will never change about me

It was so popular, so more people identify me from 'Friends' than anything else

I think we can all learn things if we really want to. It's fascinating how that can get expedited when you have a support system around you

I love flexing theater muscles. Television has merits as well, but there's no substitute for live theater

I went to a couple of Rangers games at the Garden, and someone at the NHL had seen me and figured I was a fan and decided to approach me about having a blog during the playoffs.

Eddie Cahill is a married man. He is married to Nikki Uberti. She is a painter, actress, makeup artist, and former model.

Moreover, she has also done work in video games, most notably in “Metal Gear Solid 4: Guns of Patriots.” This is Uberti’s second marriage as she was previously married to photographer Terry Richardson.

The couple dated for a long time before exchanging wedding vows on 12 July 2009.

Soon after getting married, Nikki gave birth to their first son, Henry Uberti, in 2010. Henry remains their only child so far and the family of three is living happily.

Who is Eddie Cahill?

Eddie Cahill is an American movie, TV, and stage actor. He is famous for his works in Miracle, Friends, and CSI: NY.

Although he has not revealed the names of his parents, his father was a stockbroker and of Irish descent, whereas his mother worked as an elementary school teacher and is of Italian descent.

He is the second of three children and has an older and a younger sister.

Cahill spent his childhood days in New York and initially wanted to be a school teacher. However, he changed his mind after watching the movie, Les Miserables at age 17.

His ethnicity is Irish, and Italian.

Talking about his educational background, he completed his high school education at Byram Hills High School in Armonk, New York in 1996.

After graduating from acting school, Eddie landed a role in the Off-Broadway production of The Altruists in 2000 which caught the eyes of Sarah Jessica Parker.

He then landed roles in Felicity, Sex and the City, and Law & Order: Special Victims Unit. Moreover, he also featured Tag Jones, one of Rachel’s boyfriends in the popular sitcom, ‘Friends’.

His character was Rachel (Jennifer Aniston)’s young and underqualified but good-looking assistant whom she eventually dated. However, they later broke up and Tag stopped appearing.

In 2004, he garnered more attention as he landed a major role in the hockey movie, ‘Miracle’. His character, Jim Craig was his boyhood hero.

However, as he had never played as a goalie before, most of the game-action sequences were filmed with former NHL goalie Bill Ranford. His performance gathered positive responses from critics.

In 2004, he starred as Don Flack in the CSI series, CSI: NY. His character was a cocky, snarky homicide detective who backs up the team. This is probably his best-known role and the show ran for nine seasons which he featured in all 197 episodes.

In 2012, Eddie performed as “annoying neighbor Terry, a swinging bachelor true to the era, who unlike everyone else in this play, has no deep feelings at all” in the play, ‘3C’, at the Rattlestick Playwrights Theater.

A couple of years later, he landed the main role in the second season of Under the Dome in which he portrayed a former EMT, Sam Verdreaux for three seasons before the show got canceled.

In 2016, Cahill landed the main role of Conner Wallace in the legal drama, ‘Conviction’. His character was a New York County District Attorney. The drama received negative reviews and got canceled after its debut season.

In 2019, he landed two roles. He appeared as Michael Alber in L.A.’s Finest and Eddie Barrett in NCIS: New Orleans.

Eddie stands at a height of 6 feet 1 inch. He has dark brown hair and a pair of blue eyes.

Eddie Cahill has an estimated net worth of around $3 million. His primary source of income is his career as an actor.

Although he has not revealed his salary, on average, an American actor earns around $40k annually.

Cahill has not been involved in controversies so far.

As of 2020, he has not done anything controversial in his career as an actor and has kept his profile clean. Similarly, there are no rumors about him of any kind.

Although Cahill has social media accounts, he prefers to stay private and does not post much on social media.

You may also like to read more about the Bio, Career, Net Worth, and more about Nikki Uberti, Jennifer Aniston, Tate Donovan, and more.