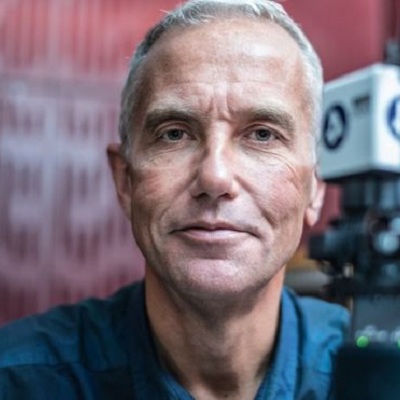 If you want someone to rant at you in the radio, I can't do that

Our editor came to work today in a vibrant pink shirt. Vibrant. Several members of staff have had to go home sick

I'm sorry for croaking at you this evening. This is PM, I'm Eddie Mair: the walrus of news.

Eddie Mair is a gay and currently lives with his partner Paul Kerney in Harrow, North-West London. Paul is also a journalist who serves for BBC Online. They met in an annual function of the BBC and soon started dating. After some time, they started living together as a pair and it is likely that they will get married soon.

Who is Eddie Mair?

Eddie Mair is a Scottish broadcaster, presenter and political commentator who has worked as a presenter on BBC radio and television. He was recorded as the 28th most powerful LGBT individual at The Independent on Sunday’s Pink List of the year 2013.

He was born on 12 November 1965 in Dundee, Scotland which makes him 53 years old today. His father was a lorry driver whereas his mother was a nurse. He has no siblings. His nationality is British and his ethnicity is unknown.

Talking about his education, Eddie went to Braview Academy in Dundee, Scotland. He didn’t join any universities and even rejected a university place to work in a local radio station.

Eddie’s career began in a local radio station in Dundee called Radio Tay. He joined BBC as a sub-editor in 1987. He then went on to be a presenter for Good Morning Scotland and also Reporting Scotland. Moreover, he hosted Breakaway, a famous weekly program on BBC Radio 4.

Mair became famous for his mixed serious journalism with his witty and satirical type of commentary when he was the host of Broadcasting House from 1998 to 2003 after which he overtook PM and Fi Glover became the presenter of the show.

Mier has also been a presenter for Newsnight on BBC Two and 7 O’Clock News on BBC Three. He was also the original host of the BBC series Time Commanders. Furthermore, he has guest presented four editions of The One Show with Alex Jones on BBC One.

On the 17th of August 2018, Mair presented his last PM show and announced that he would join LBC. Eddie then took over Drivetime Show on LBC from Iain Dale and started presenting the show from Monday-Friday 4-6pm.

Mair has won several awards for his works. He won the News Journalist Award in 2005 at Sony Radio Academy Awards. Furthermore, he has also been the winner of Sony Award for Speech Broadcaster of the Year, Best Breakfast Show and was also nominated for two Sony Awards for Midday with Mair.

Similarly, he won a Gold award at Sony Radio Academy Awards for his famous interview with Julie Nicholson and another Gold award for the PM program’s coverage of Hosni Mubarak’s resignation as the president of Egypt.

On his show, the PM, Eddie had a long-running dispute with Robert Peston who is the former Economics Editor of the BBC.

In 2017, it was reported by The Guardian that Mair refused to take a pay cut as a part of the BBC’s gender equality adjustments. However, Mair completely denied this and said that we would take a pay cut in writing.

His body measurements like height and weight are not known. He has salt and pepper colored hair and his eyes are light brown in color.

You may also like to read about the bio, career, net worth, body measurements, social media of Joe O’Brien, Anne Thompson, Garrett Haake.

Scottish broadcaster Eddie Mair opens up about an attack on him in London!