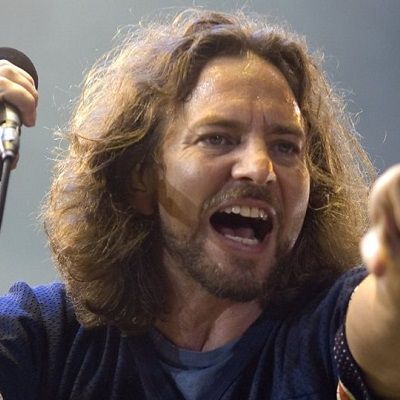 Eddie Vedder is married to Jill McCormick. She is an American philanthropist. They were married in 2010. Together, they have two children, Olivia and Harper.

Previously, the singer was married to his longtime girlfriend, Beth Liebling, musician. They were married in 1994 in Italy. However, they parted away after six years.

Who is Eddie Vedder?

American Eddie Vedder is an award-winning musician and singer-songwriter. He is renown as the lead vocalist for the American rock band Pearl Jam.

In 1965, his parents were separated. His mother, Karen remarried Peter Mueller and they raised as a child. However, they were also separated. Till the time, Vedder didn’t know that Mueller was not his biological father.

His biological father, Edward died of multiple sclerosis whom he considered as the family friend when he knew the truth.

He attended school in his hometown. Later, he joined San Dieguito High School, Encinitas, California. He dropped out of the institute due to the high pressure of work and study. During the time, he used to work on drug store at night.

However, in early 1980, he earned his high school GED and attained a community college near Chicago.

At the very early phase, Eddie worked in a drug store, Resturant as waiter, Gas station as an attendant. During his job as an attendant, he met Jack Iron, former drummer of Red Hot Chili Peppers. Soon, they became basketball friends.

Later, Eddie wrote lyrics for three songs and recorded the songs which were later entitled as Momma-Son. Former Mother Love Bone members listened to the tape and got impressed by the unique sound. The band recruited him for the Temple of the Dog. He provided background vocal for many songs of the project.

Initially, Vedder was recruited by the founding members like Ament, Gossard, and McCready for the band. In 1991, they launched their first album, Ten under record label Epic Records. The album became an instant best selling with 13x Platinum.

Apart from the band, Vedder has contributed soundtracks for various films and documentaries which includes 1995-  Dead Man Walking, 2004- A Brokedown Melody, 2007- Body of War and Reign Over Me.

Eddie has collaborated with other rock bands like The Who, Ramones, R.E.M, Bad Religion, and Fastbacks.

-2007, Environmentalist of the Year by SIMA Waterman’s Honorees

Eddie Vedder has an estimated net worth of $100 million. His earning as the lead singer of the band is $833k US monthly which makes $10 million US annually.

Apart from this, he earns through his movie cameo and music concert.

He is a blue-eyed auburn. His height is all most 5 feet and 8 inches and weighs 68kg.

On 11th July, at the concert in Milton Keynes, Eddie’s surprised everyone by his speech saying that there are many people who are looking for reasons to kill people.

Such people are looking for reasons to cross the borders and take off the land where they don’t belong. He doesn’t want to pay taxes in order to bomb on the children.

Due to such remake, Israeli fans flooded the Pearl Jam’s Facebook page with comments criticizing the speech.  Israeli rock DJ Red published an open letter telling that Eddie has revealed his true face and to remain away from  Israel.