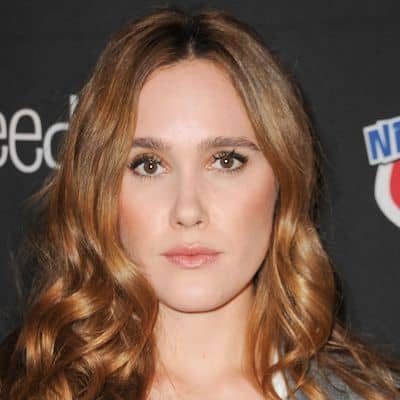 Eden Brolin’s relationship status is engaged. She is with an actor named Cameron Crosby. The details of their affair are unknown but this couple exchanged rings in Aug 2018.

The news of their engagement was shared by her father Josh via his IG account. Eden and her fiancee are a lovely couple and often appear on each other’s social media posts.

In late Aug 2018, she posted an adorable picture of them where they were sitting on the river bank and were kissing each other.

Who is Eden Brolin?

Her three upcoming screen projects, Kingfish, Candy Land, and The Cleaner are under the post-production stage.

Her birthdate is 30 Nov 1994 and the place she was born is Los Angeles, California, the US. The name of her mother is Alice Adair plus her father’s name is Josh Brolin (actor).

Similarly, Eden’s ancestry is Caucasian and has an older brother named Trevor Brolin.

As per her academics, she might be a high school pass out.

Eden Brolin has become a popular face of the acting world where she made several screen appearances. Her first short movie was X as Jasmine that was released in 2008.

Also, she is known for her TV acting. She played the role of Charlie Singer in the TV show Beyond from 2017 till 2018. Also, Eden was seen in a Drama TV series Yellowstone (2020) as Mia.

In 2016, she did an episode of Code Black in which she played the character of Dana Albright.

By the records of 2021, she has a net worth of around $500k (estimated). The per year salary and other incomes of her are not disclosed.

On the other hand, her dad, Josh has assets worth $45 million.

This talented actress/author is keeping herself away from rumors and desperate scandals.

Eden Brolin’s height of 5 ft 8 inches and her body weight is average. Also, she has brown eyes and has natural dark brown hair.

She mostly dyes her hair in brown color.