Eden Hazard is a Belgian professional footballer. He plays as a winger or attacking midfielder for Spanish club Real Madrid. He is married and has three children. 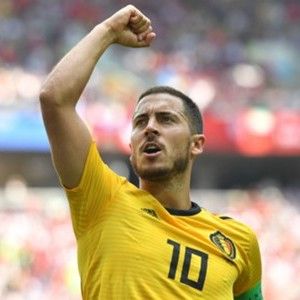 Why change? If you're happy, and things are going really well at one place, there is no need to change.

It never became an obsession for me to score at all costs. I've always said that I'm not a big scorer, I'm a worker.

Eden Hazard is a married man. He married his longtime girlfriend Natacha Van Honacker in 2012. The couple first met when he was fourteen years old.

The third son, Samy, was born in September of 2015. There are no other relationships or extra marital affairs related to him. There are no rumors of their divorce to date. At the current time, he is married lives happily with his family.

Who is Eden Hazard?

Eden Hazard is a Belgian professional footballer. He plays for Belgium national team and Real Madrid. He plays as an attacking midfielder and a winger.

Hazard is best known for his speed, creativity, and technical ability and is described as a “fearless, explosive attacking midfielder who can change the game with a turn of pace or a dribble”.

Reflecting on his early life, Eden Hazard was born on January 7, 1991. He experienced his childhood in La Louvière, Wallonia, Belgium.

His birth name was Eden Michael Hazard. Eden is the son of Carine and Thierry Hazard, both former footballers. His mother, Carine, and his father, Thierry, both were football players. After playing football, both parents became sports professors.

He was raised in Braine-le-Comte, Belgium. Hazard is the oldest of four children. His brothers, Thorgan Hazard and Kylian Hazard are also professional footballers while Ethan Hazard remains playing in the youth academy of Eden’s former club Tubize.

He is of Belgian (Walloon) ethnicity and holds Belgian nationality. There is no information available regarding his education.

Eden Hazard started his footballing career in Belgium playing for local clubs Tubize and Royal Stade Brainois. Hazard spent two years in the club’s academy. At the age of 16, he made his professional debut in November 2007.

In the 2010-2011 Season, Eden scored his first goal of the season against Caen in the Coupe de la Ligue in October. He scored his second goal against Nancy in a 3-0 victory.

In March, it was announced that Eden’s contract will be extended for another year with Lille. Eden scored 1 goal to defeat Paris Saint-Germain in a 1-0 match in the Coupe de France final.

In June of 2012, he signed up with Chelsea for around $40 million and made his debut for the English club in a friendly match against Seattle Sounders during pre-season.

Moreover, Eden made his debut for Chelsea in the 2012 FA Community Shield against Manchester City which his team lost. His league debut was a week later against Wigan Athletic, which Chelsea won with a score of 2-0.

In the 2013-2014 Season, Eden played his initial game for Chelsea against Bayern Munich in the 2013 UEFA Super Cup which his group lost in spite of a brilliant 2 goals by Eden, in the long run losing to Bayern with a score of 5-4 ending in a penalty shoot-out.

In May of 2014, Eden was named in Belgium’s group for the 2014 FIFA World Cup and went ahead to give a fantastic execution with various assists and numerous goals which helped his team reach the quarter-finals.

Eden has additionally been named as the captain of the Belgian national football group for the UEFA Euro 2016 finals. He is the main player in Europe to have taken 15 penalties and scoring every one of them and additionally maintaining a perfect record of 16 straight penalty goals.

Currently, Eden Hazard has got on the scoresheet with a 3-0 victory against Southampton. Eden Hazard has scored 8 goals within 10 matches since former Napoli boss Maurizio Sarri succeeded Conte this summer.

Considered among one of the best players in the world, he has often been compared to star footballers like Lionel Messi and Cristiano Ronaldo.

Eden Hazard is playing for his country as a midfilder. The Euro cup matches will take place in different countries which are listed below:

There is no controversy found yet but there are some transfer rumors about him. On 4 June, Chelsea officially confirmed on its site that the club had agreed to terms with Lille for the transfer of Eden.

The transfer fee was rumored to be priced at £32 million while Hazard will apparently receive a weekly wage of around £170,000.

Additionally, there were rumors flying around about Eden exchanging to Real Madrid.

But he addressed the rumors in an interview with Chelsea’s magazine saying that he would like to win the EPL title next year too and also win the Player of the Year.

Talking about his body measurements, Eden Hazard has a perfect height standing 5 feet 9 inches (1.73 m) and weighs around 74 kg.

He has an athletic body with dark brown hair color and green eye color. His chest size is 38 inches, his arms size is 14 inches and waist size is 30 inches.