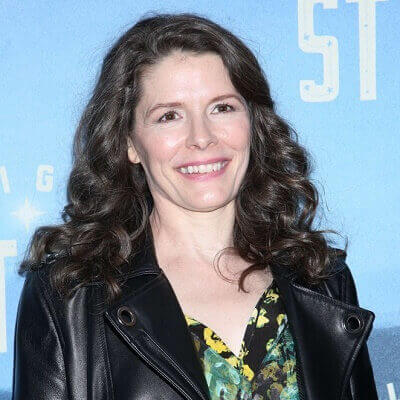 I hope I'm better today than I was yesterday. I don't believe in glory days or anything like that, so I think the best is tomorrow or later this afternoon

When I look at my kids, and the ease with which they pick up music, I wish I had that.

Edie Brickell is a married woman. She is married to Paul Simon. He is an American musician, singer, songwriter and actor who gained huge success as half of the duo Simon & Garfunkel. In total, he has earned sixteen Grammy awards for his work.

The couple first met on November 5, 1988, when Brickell was performing on Saturday Night Live when she noticed Paul standing in front of the cameraman. She recalls the moment,

“Even though I’d performed the song hundreds of times in clubs, he made me forget how the song went when I looked at him. We can show the kids the tape and say, ‘Look, that’s when we first laid eyes on each other.'”

The couple started dating after that and exchanged wedding vows on May 30, 1992. She is the third wife of Paul and she is 25 years younger than him. From their marriage, they have three children: Adrian, Lulu, and Gabriel.

Who is Edie Brickell?

Edie Brickell is an American singer-songwriter. She is best known for the album, Shooting Rubberbands at the Stars which was the debut album of her band, Edie Brickell & New Bohemians.

Edie Brickell was born as Edie Arlisa Brickell in Oak Cliff, Dallas, Texas, on March 10, 1966. As of 2020, her age is 54. She was born to Larry Jean Linden (mother) and Paul Edward Brickell (father). She was one of her parents’ two daughters. Her older sister’s name is Laura Strain.

She spent her childhood days in Oak Cliff, Dallas, Texas. Her ethnicity is English, Irish, Welsh.

Talking about her educational background, she went to Booker T. Washington High School for the Performing and Visual Arts located in Dallas. Following her high school graduation, she went to Southern Methodist University. She left and joined a band and decided to focus on songwriting.

As a solo artist, she released her debut solo album, ‘Picture Perfect Morning’ in 1994. In 1988, Edie Brickell & New Bohemians released their debut album, ‘Shooting Rubberbands at the Stars’. The album became a huge hit both commercially and critically. Two years later, The band’s released its follow-up album, Ghost of a Dog in an effort to highlight their eclectic personality and shift away from the pop feeling of their first record.

Brickell released her second solo album, Volcano in 2003. In 2006, they released their fourth album, Stranger Things. Moreover, in 2018, the band released their latest album, ‘Rocket’.

In 2010, she founded the band ‘The Gaddabouts’ with herself as the lead vocalist and guitarist, Steve Gadd on drums, Pino Palladino on bass and guitar, and Andy Fairweather Low on electric and acoustic guitars and background vocals.

Similarly, in April 2013, she collaborated with Steve Martin and released the album, ‘Love Has Come for You’.

How much is Edie Brickell’s Net Worth?

Brickell stands tall at a height of 5 feet 9 inches. Her hair color is dark brown and similarly, her eyes are also brown in color. There is no information about her weight and body measurements for breasts, waist, and hips.

In April 2014, the Police arrested Edie Brickell and her husband, Paul Simon from their house for disorderly conduct charges from their home in New Canaan, Conn.

Brickell told the officers that she confronted her husband after he “broke her heart”. However, she did not give any details. During the argument, he shoved her and she slapped him.

Simon suffered a cut to his ear, and Brickell, who smelled of alcohol at the time had a bruise on her wrist.

The couple was allowed to remain on the property, but Paul agreed to spend the night in Manhattan. However, the couple claimed they are fine together and it was a rare argument.

Brickell is active on Facebook but seems to be absent from other social media platforms. Her Facebook page has over 48k followers.

You may also like to read the Bio, Career, Net Worth, Relationships, and more about Paul Simon, Simon Cowell, Charlie Hunnam, etc.