Famously known for his rant videos and for being a huge fan of the American football team Philadelphia Eagles.

Bryant is single as of now. He might be waiting for someone who can love him unconditionally. However, currently, it seems like he’s more focused on building his career rather than build a relationship with someone. 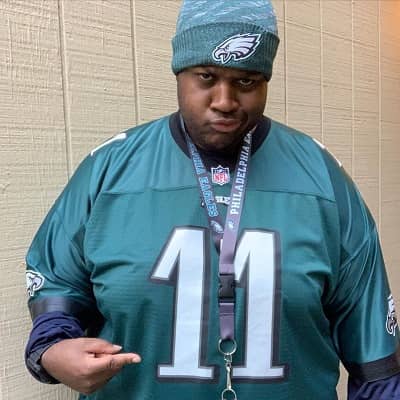 EDP445(EatDatPussy445) is a social media sensation, as well as a former American Youtuber. He is famously known for his rant videos and for being a huge fan of the American football team Philadelphia Eagles.

EDP445, the actual name Bryant Turhan Emerson Moreland, was born on 15 December 1990. So, currently, he is 30 years old and falls under the zodiac sign of Sagittarius. He was born and raised in Los Angeles, California, United States. Hence, he holds American nationality.

Bryant is an American YouTuber. He started his journey on June 13, 2010, and posted his first video of him performing freestyle rap on the same day.

He then began uploading about the Philadelphia Eagles after November 16 the same year, with “59-28. Eagles fukin kills the redskins.”

It became a major topic of the channel, even so, he did release videos related to other topics such as cooking videos, rants, Q&As, internet challenges, and vlogs. Bryant became popular for his Philadelphia Eagles-related videos.

Further, he has also hosted a series called “Don’t You Hate That S**t“. In 2012 and 2013, he opened spin-off channels, CHAOTICKITCHEN445 dedicated to cooking and EDPGAMING1.

Whereas he has been a popular subject of internet memes, and many of his older videos were on trend such as “I flooded the toilet in chipotle” and “Nearly Sh*tted On Myself At School”.

EDP445 is a popular YouTuber whose youtube channel hit 1million subscribers on 12 February 2020. He even released a video thanking his subscribers.

However, youtube denied him the Gold Play Button reasoning that his channel doesn’t match their eligibility criteria, and so he uploaded a video related to it on March 5, 2020.

Youtube came to this decision due to disrespect from Bryant, saying that Youtube “is on that little bitch shit”.

Even so, he received two Silver Play Buttons for his backup channel. The fans began a petition to send him a Gold Play Button.

Bryant being a popular YouTuber earns a net worth of approximately $2 million -$5 million. His main source of income is obviously his different youtube channels as well as social fame. But there’s no information on his salary and assets at the moment.

There have been rumors surrounding him about child grooming and pedophilia which harmed his reputation and led to deleting his videos and shutting down his channel on April 27, 2021. This rumor began between July 2020 and April 2021.

All total he has been busted texting 8 minors till now. He later deleted all his videos on his main channel. This rumor cost him a large number of subscribers and reputation. His main channel was terminated However, his spin-off channel is still available.

EDP stands tall at the height of 61 inches and weighs over 71 kgs. He wears shoes of 8.5(US) size and his biceps size is 24 inches. Other details on his body measurement are not given right now. He has short black hair and a pair of Black eyes.