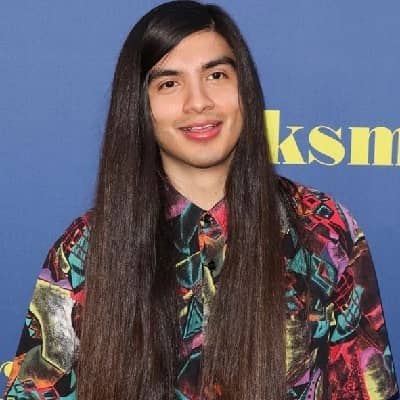 Talking about his love life, Eduardo Franco is presently single and he is not dating anyone at the moment. It seems that he is focused on shaping his career right now.

Who is Eduardo Franco?

Eduardo Franco is a well-recognized American comedic actor. Franco is widely famed for American Vandal(2017), The Package(2018), and Booksmart(2019).

Moreover, he has emerged in many national commercials such as sports for GEICO, Samsung, and TurboTax.

Eduardo Franco has not revealed his exact birth date. However, it seems he is in his early 20s. Likewise, his birthplace is Yuma, Arizona, the USA.

Not known much about his father and mother, Eduardo has been secretive towards his family details. Moreover, he has not disclosed his sibling’s details as well in the public till now.

Talking about his nationality, Franco holds an American identity whereas his ethnicity is Mexican.

Regarding education, the actor has not mentioned his educational information publicly. He might have completed his graduation degree from the local university in Arizona.

Well-known movie actor and television actor, Eduardo Franco, debuted from his role in 2015 in Gamer’s Guide to Pretty Much Everything. It is an American comedy television series that is made by Devin Bunje and Nick Staton. The series aired on Disney XD from 22 July 2015 to 2 January 2017.

The series’s main stars are Cameron Boyce, Murray Wyatt Rundus, Felix Avitia, and Sophie Reynolds. Franco portrayed the role of Stu and featured in 7 episodes of the series. Likewise, he has emerged in some other series such as Adam Ruins Everything(2015-2017) performing the role of Gavis in four episodes, The Skinny(2016) in the role of Jose, You’re the Worst(2016) in the character of Justin, and so on.

Additionally, the famed personality has appeared in Lopez in 2017 in the role of Audience Member, Idiotsitter(2017), Good Game(2017) as Gamer. Franco came into the hype after portraying the role of Spencer Diaz in American Vandal in the year 2017.

American Vandal is a name American mockumentary streaming television series made by Dan Perrault and Tony Yacenda, featured on 15 September 2017 on Netflix. It is a parody of true crime documentaries like Making a Murderer and Serial. Eduardo appeared for six episodes in the series.

Also, he has made a well-named role in other series such as Lady Dynamite in 2017 as Spider, The Cool Kids in 2018 as Kevin the Delivery Clerk, Those Who Can’t(2019) as Kevin, Conan in 2020, and Stranger Things in the role of Argyle.

Franco, in addition, has made his mark on the movie industry as well. In the 2018 film, he appeared The Package portraying the role of Jeremy Abelar for the first time. Moreover, Eduardo has emerged in some other movies such as Booksmart, Labeled, The Binge, Superintelligence, We Broke Up, and so on.

In the coming days, Eduardo is expected to be appearing in Queenpins.

Popular star, Franco has earned decent money from his profession in the acting industry. He has been active in his profession from the year 2015 till the present.

It is reported that Eduardo Franco has an estimated net worth of $1 million.

An American star, Eduardo has never been part of any controversial matter or rumors till now. The actor has been preoccupied with his professional and private life.

It seems that Franco prefers enjoying his personal life and does not want to merge it with her professional life.

Eduardo, A young rising star has handsome looks and an admirable personality. He stands at a height of 5 feet 10 inches. Also, he has a balanced bodyweight of 76 kg.

Furthermore, Franco has brown eyes whereas his hair is light brown. He does not have a tattoo on his body.

Regarding his social media presence, Eduardo Franco is an active personality on social media. Eduardo has more than 29.1k followers on his official Instagram account @dumuardo.