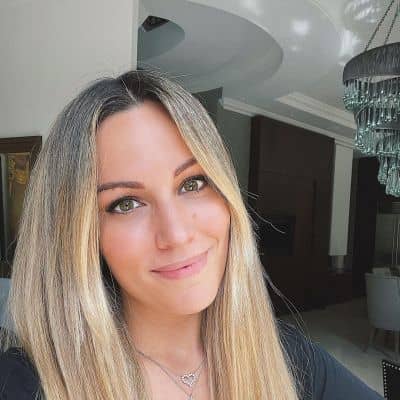 What is the relationship of Edurna Garcia?

Talking about her love life, Edurne Garcia is living a married life with David de Gea.

David is a well-named Spanish professional footballer who is known as a goalkeeper for Manchester United and the Spanish national team. The couple started dating each other in 2010.

The couple mentioned Edurne’s pregnancy in November 2020. De Gea posted a picture of a baby bottle on his Instagram. The couple welcomed their first child, Yanay on 4 March 2021.

The couple happily lives along with their daughter.

Who is Edurne Garcia?

Edurne Garcia is a well-recognized Spanish actress, singer, television star, and model. Garcia is widely famed for her participation in the Spanish casting show, Operacion Triunfo on TVE which ended in sixth place in 2006.

Moreover, she also represented Spain at the Eurovision Song Contest 2015 with the song, Amanecer.

Edurne Garcia was born on 22 December 1985. At present, her age is 36 years old. Likewise, her birthplace is Madrid, Spain.

Edurne is the daughter of her father, Tomas Garcia whereas her mother is Yolanda Almagro.

Talking about her nationality, Garcia holds a Spanish identity whereas her ethnicity is Hispanic.

Regarding education, the star personality has not revealed her academic background to the public. She might have graduated from the university of the town.

Edurne started her music journey at the very early age of 9. She joined a children’s music band named Trastos. She was a prominent member of the young group.

The singer released her first studio album, Edurne in 2006, which rise to the single, Despierta which debuted in the fifth position of the Spanish Singles Charts, Amores Dormidos.

She has also released many commercially successful albums including Ilusion(2007), Nueva Pile(2010), and Adrenalina(2015) which broke into the Top 20 of the Spanish charts.

The star then announced she would be joining Got Talent Espana as one of the four judges on 5 August 2015. She also joined the cast of the daytime soap opera Servir y proterger on 31 October 2018.

Earlier, she recorded and released a video of the song, Taste the Feeling, a Coca-Cola campaign for the Spanish-speaking world.

Edurne then published her first single in four years, Demasiado Tarde on 24 April 2019.

A Top star, Garcia has earned a massive amount of money from her profession. She has been active in her profession from the year 2006 till the present.

Edurne has never been part of any controversial matter or rumors till now. The star has been preoccupied with her professional and private life.

It seems that Garcia prefers enjoying her personal life and does not want to merge it with her professional life.

She stands at a height of 5 feet 6 inches. Also, she has a balanced body weight of 58 kg.

Furthermore, Garcia has hazel eyes whereas her hair is blonde. Her body measurement is 32-26-34 inches(chest-waist-hip) respectively.

Regarding her social media presence, Edurne Garcia is an active personality on social media. Edurne has more than 1.8 million followers on her official Instagram account @edurnity.

Moreover, Garcia is also available on Facebook with nearly 637k fans and supporters. The star is also active on YouTube with a verified channel and more than 39 million views.