Edward Lodewijk was an American musician, producer, songwriter. He died due to cancer. Edward was married for the second time with his longtime girlfriend. He had a son from his past affair. 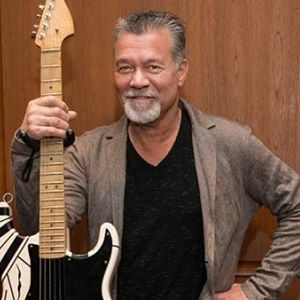 Practice. I used to sit on the edge of my bed with a six-pack of Schlitz Malt talls. My brother would go out at 7pm to party and get laid, and when he'd come back at 3am, I would still be sitting in the same place, playing guitar. I did that for years — I still do that.

Eddie Van Halen in April 1996, in an interview with Guitar World, when asked about how he went from playing his first open A chord to playing "Eruption"

Edward Lodewijk Van Halen is married to Janie Liszewski on 27th June 2009, at his Studio Home. And their relationship is going well currently. Eddie’s 18 year old son was his best man and the wedding was officiated by his brother Alex. 100 guests were invited for their marriage ceremony.

Edward met actress Valerie Bertinelli in his Halen concert in Shreveport, Louisiana. Then they married each other in 1981 but were divorced after 25 years of marriage in 2007. They also have a son together Wolfgang Van Halen who is now an American musician who is currently the bassist for Van Halen.

Who was Edward Lodewijk Van?

Eddie Van Halen was an American musician, songwriter, producer. He is also an inventor.

He was known to be second after the Jimi Hendrix, who was the most influential, original and talented rock guitarists of the twentieth century.

He was working with his brother Alex Van Halen, singer David Lee Roth, and bassist Michael Anthony of the American hard rock band Van Halen. He is known as one of the best and most influential guitarists in the history of rock music.

Eddie Van Halen died on 6th October 2020 due to cancer. The singer was suffering from throat cancer and was undergoing the treatment since quiet sometime. Eddie was survived by his wife and son. His son paid the tribute on social media with the caption,

“I can’t believe I’m having to write this, but my father, Edward Lodewijk Van Halen, has lost his long and arduous battle with cancer this morning.

He was the best father I could ever ask for. Every moment I’ve shared with him on and off stage was a gift.

My heart is broken and I don’t think I’ll ever fully recover from this loss.

Edward Van was born on Jan 26, 1955, in Nijmegen, Netherlands. His ethnicity is mixed(Dutch, Indonesian Javanese, Italian).

He was the son of a Dutch father Javan Helen a clarinetist, saxophonist, and pianist. His mother Eugenia Helen was Indonesian-born. In February 1962, his family moved to the United States, settling in Pasadena, California.

Both Eddie and his older brother, Alex, provided with naturalized U.S. citizen and were learned to play the piano as children starting at the age of six. While Alex began to play the guitar, Eddie used to bring a drum kit and began his practicing for hours every day and this was how he started his career from his childhood.

Van Halen had once said in an interview that he never read the music. Instead, he told that he used to learn from watching and listening to it.

His father died in December 1986. His brother Alex is eventual sobriety in April 1987.

Halen moved with his family to the U.S. in the ’60s. He went to a college called Long Beach City College for a music contest and he won the content. He and his older brother, Alex, began taking piano lessons at an early age. And this was the starting of their future musical career. Now they have achieved the success and are well-known among all.

Consequently, while Alex began playing the guitar, Eddie bought a drum kit and began practicing for hours every day. After Eddie heard that Alex was going to perform he decided to switch instruments and doesn’t work with him. He began to learn how to play the electric guitar and finally, he was renowned influential guitarists. As a teen, he would often practice while walking around at home.

In 1972, Van Halen formed another band, named “Genesis”. They changed their name to “Mammoth” later when Van Halen was aware that there was another same English rock band and they rented David Lee Roth. After some time, a Halen became frustrated toward singing lead vocals.

Then he decided that they could save money by adding Roth to their band. Michael Anthony later replaced Mark Stone on the bass guitar. The band later adapted to change its name as Roth suggested that the last name of the two brothers were same and it would sound cool.

At one point, the band considered using the name “Rat Salade”, after the Black Sabbath song of the same name, before settling on “Van Halen”. In 1976, band supporter Rodney Bingenheimer has invited Kiss bass. He was the guitarist. They invite Gene Simmons to check out a Van Halen show.

Impressed, Simmons soon produced a Van Halen demo tape with recording beginning at the Village Recorder studios in Los Angeles. In May 1977 at the Starwood, Van Halen was spotted by the record. Van Halen enjoyed success from the release of their self-titled debut album in 1978.

As of 2007 Van Halen has sold more than 80 million albums worldwide and had the most number one hits on the Billboard Mainstream Rock chart. During the 1980s they also had more Billboard Hot 100 hits than any other hard rock or heavy metal band.

Halen toured the U.S. and Canada from September 2007 through summer 2008. The band released their twelfth studio album, A Different Kind of Truth, on February 7, 2012, their first album in 14 years.

In 2007, an award was instituted in the name of Edward to be given to the player who hits 500 or more notes in succession. Edward Van Halen had received the lifetime achievement award – 10th Annual LA Music Awards 2001.

He net worth is $85 million. He has amassed a huge amount of net worth from his musical career. He currently resides in a $2 million lavish mansion in Los Angeles. In 2008, he sold his Beverly Hills house for $1.5 million.

Simmons said in a recent interview with Guitar World that Eddie was “very serious” about leaving Van Halen at the time, adding, “He was so unhappy about how he and David Lee Roth were or weren’t getting along.” So there were rumors about Edward that he was going to leave Van Halen and join Kiss.

Besides, he was involved in several charity works throughout the World.

He has got the hazel color eye and light color brown hair. His height is 5 feet 8 inches and weighs 72 kg.