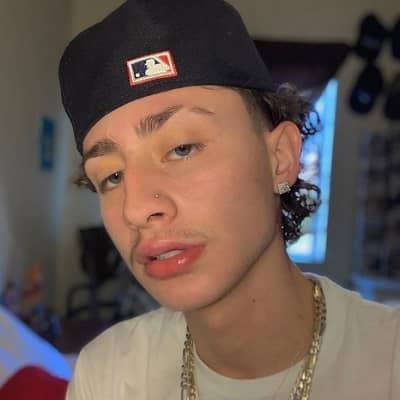 El Guero MP is not having a love affair and is possibly single. There are no details about his girlfriend or partner.

Who is El Guero MP?

El Guero MP is an American internet personality. He is popular for his TikTok content where he uploads lifestyle, lip-syncs, and comedy-related posts.

This web-star was born on April 04, 1999, in the United States with a real name Christopher Marquez. His mother and father’s names are not disclosed.

Talking about his siblings’, he has a younger brother. His sibling is also active on TikTok.

He holds Caucasian ancestry. Regarding his academics, he has studied at Hinkley High School.

El Guero MP is doing great in his web career. He started to upload posts on TikTok from the beginning of 2018. At present, he has over 1.6m fans with over 33.4 million hearts.

His amazing lip-sync and comedic sketches made him popular on this platform. Moreover, his creations are loved by his fans as well as other viewers.

Along with TikTok, he is also active on YouTube. He opened his channel on 27 June 2013. As of 2020, this channel is subscribed by more than 128k subscribers.

This star is doing great in his personal and professional life and is not surrounded by any scandals or rumors.

He has an estimated net worth is $500 thousand. Moreover, the estimated earning from his YouTube channel is around $2.5K – $40.4K per annum.

He drives a car which is often seen in his YouTube video.

He has half tattoed his right hand and behind his left ear. He has uploaded his tattoo making a video in his TikTok account.

This star has a lean body but its stats are unknown. In addition, he has an average height and has a decent body mass.