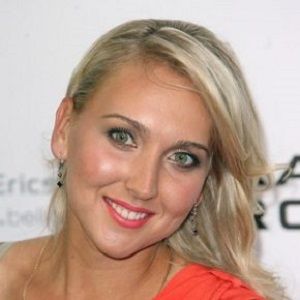 I will remember this day for the rest of my life. There is nothing you can say. It's just like you won the match after the earthquake and it just feels great.

I felt tight from the beginning of the match to the end. I couldn't relax.

I think this is the biggest win in my career. To beat Venus in Wimbledon is just something amazing.

Elena Vesnina has kept her personal life private and out of the spotlight. She usually doesn’t talk about her private life in media and public. However, it is revealed that she is a married woman. She is married to businessman Pavel Tabuntsov. The couple got married in 20 November 2015. The couple has been married for over a year now and their relationship is going very well.

Who is Elena Vesnina?

Elena was born on 1 August 1986, Lviv, Ukraine. Her nationality is Russian and she is of Russian and Ukrainian ethnicity.

Her birth name is Elena Sergeyevna Vesnina. She is the daughter of Sergej Vesnin and Irina Vesnina. Her mother is a teacher. She has a younger brother named Dmitry. Her brother is also a former junior tennis player. She started playing tennis at aged seven in the sports school in Sochi.

There is no information on Elena’s educational background.

Elena began playing tennis at a young age. In 2003, she entered two successive ITF events in India at Chennai and Bangalore. At that time, she reached her first semifinal and another quarterfinal in the main draws. Since then, she has played in several international tournaments. In her first tournament of the year at the 2007 MAW Hardcourts, she reached the quarterfinals. However, she lost the quarterfinals to Italian Tathiana Garbin.

One of Vesnina’s best seasons in 2009. At that time, she reached her first WTA final. Then, she won her first WTA titles in Hobart and Eastbourne. In 2012, she partnered with Ekaterina Makarova. They have won ten titles together, including two Grand Slam titles and the 2016 WTA Finals. In addition, they won Olympic gold at the 2016 Summer Olympics. Afterward, she continued her good form into 2017 and won the biggest singles title, the Premier Mandatory-level title.

Elena Vesnina: Salary and Net Worth

Talking about Elena’s body measurement she has a height of 5 feet 8 inches and weighs 60kg. Her dress size is 4(US) and shoe size is 9(US). Her hair color is blonde and eye color is green.