Actor-model Elijah Canlas is low-key about his love life.

Elijah Canlas is still in the initial stage to build his career. He may be more focused on building his professional life better or maybe doesn’t want to share his relationship with the media.

So as of now, his relationship status is single. 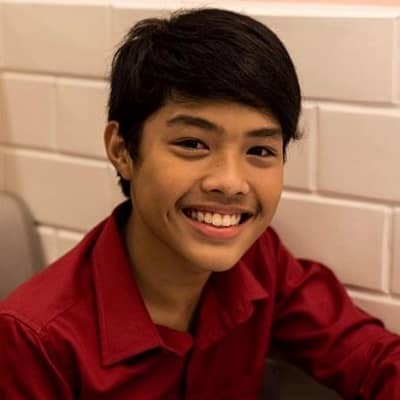 Who is Elijah Canlas?

He was born on August 17, 2000, in Bacolod City, Negros Occidental, Philippines. He is 21 years old. His full name is Elijah Luis, Madiclum Canlas.

He is of  Filipino ethnicity.

He studied theatre arts at the Philippine High School for the Arts. Studying there, he did his first film. Elijah finished high school at MINT College.

Then he was enrolled at the University of the Philippines Manila and pursued a Bachelor of Arts degree in Philippine Arts.

Elijah Canlas started his career in the year 2014 when he was studying in his school. The first film in which he appears was Sundalong Kanin.

Then in 2014, he appears as Badong in the Sundalong Kanin movie. Following the year 2016, he started the main role in Contestant #4 movie.

Elijah then appeared in various movies in 2019 which includes, ‘KALEL, 15‘, Babae at Baril, LSS, Edward, Ang Totoong Kalaban. Just in 2020, he was seen in the film, He Who Is Without Sin as Martin.

Elijah has also performed in the dramas which include, ‘Past, Present, Perfect?‘ as a supporting role in 2019. The following year he starred in  Unconditional in the main role.

In May 2020, he was cast as one of the main actors in the YouTube series, Gameboys. The series was produced by The IdeaFirst Company.

Gameboys are a new Boys Love series (commonly known as BL series) in the Philippines that tackles the story of two young boys who found each other online amid the Coronavirus pandemic.

This actor also works as a director in the movie, Ang Totoong Kalaban in 2019.

He won Best Supporting Actor for the movie “Edward” in the year 2019. Likely, he also won Best Acting Ensemble together with the other cast members for the movie “KALEL, 15” (2020) from the PARAGON Critics Choice Awards (2020).

Being just 19 years also, he has performed in various movies and dramas. Hence, he must have good earnings but his net worth is not known.

To date, he has not been in any sort of rumors and controversies. This actor has maintained a good image among the media.

The exact measurement of Elijah Canlas’sbodyy and weight are not disclosed. However, he is 5ft. 9 inches tall.

Also, get to know about India Reynolds, Alanna Forsyth-Reaves, and Kyle Guy.