Famous as the number 1 female tennis player in Ukraine and Number 5 in the world. 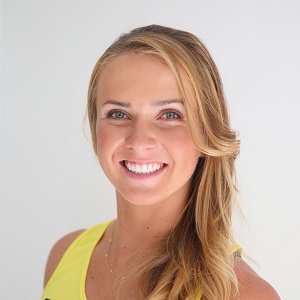 I am happy with the country I represent and to be one of the best Ukrainians ranked, which gives me a lot of confidence.

Talking about Elina Svitolina’s personal life, she is in a relationship.

At present, she is dating a French tennis player Gael Monfils. Recently during an interview, Elina praises her boyfriend and said that she learns a lot from him.

She had once dated Reece Topley. He is a cricketer who plays for England. But this affair lasted for a few years only.

Who is Elina Svitolina?

Beautiful Elina Svitolina is a Ukrainian professional tennis player. She is famous as the number 1 female tennis player in Ukraine and Number 5 in the world.

Moreover, she fought hard for winning eight WTA singles titles, among which her biggest win was at Premier 5-level tournaments, the Dubai Tennis Championships, and the Italian Open, in 2017.

Her parents, Mikhaylo Svitolin and Olena Svitolina were of Jewish descent. She was brought up alongside her brother, Yulian. While she was at a very young age, she started to play tennis as her family insisted she plays.

Eventually, she later did very well in it and is a world-class player right now.

However, her education and qualifications in detail are still to be disclosed in the coming days.

As a junior, in 2010, she earned the Roland Garros Girls Event where she defeated Tunisian Ons Jabeur to grab the title. Afterward, in the same year, her incredible talent and ability set her to participate in professional singles final at ITF $25000 tournament in the Kharkiv.

In addition, she was a finalist event at the 2012 Wimbledon Championships. Her immense talents in tennis made her qualify in the 2012 US Open. In the same year, she earned WTA 125K 2012 Royal Indian Open titled held in Pune by defeating Luksika Kumkhum, Rutuja Bhosale, Andreja Klepac, and Kimiko Date-Krumm in finals.

Following her spot-on performances, she acquired direct entry in the 2013 Australian Open. However, she could not make it past the first round after losing to Angelique Kerber.

In July 2013, she won her first WTA title, Baku Cup, by defeating Shahar Peer. The age she achieved this feat made her the first teenager to win the tournament since February of the year 2012.

In 2014, she participated in the Australian Open.  She gave fierce competition to Grand Slam Champion, Svetlana Kuznetsova, and defeated her eventually. Later on, where she didn’t make it past the semifinals of the Brisbane Cup after losing to Maria Sharapova in 2015.

Furthermore, 2017 proved to be the most successful year of her entire career as she won two massive titles, the Dubai Tennis Championships, and the Italian Open.

Elina Svitolina: Salary and Net Worth

She has generated a lot of income from displaying her charismatic talents which surely has skyrocketed her net worth. However, her net worth is still not confirmed and exact to be told, as various sources have their own say regarding it.

During her entire career, she has always maintained top-notch professionalism over her work. Her work is always admirable, and her hard work reflects on how well she is doing in her career.

She always has maintained a decent and admirable image in her entire career without attracting any rumors and controversy. Instead of attracting unwanted attention, she has worked day and night to achieve her dream and make every believe that she has no interest in becoming a controversial figure.

Elina Svitolina has an athletic body structure with a decent height of 5 feet and 8 inches matching her beautiful body. She weighs 60 kg. However, there is no detailed information regarding her exact body figure. She has hazel eye color and her hair color is golden brown.