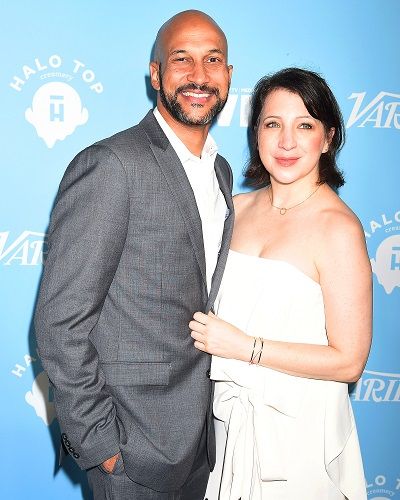 Also, her acting credit includes in The Junior Defenders, The Cake Eaters, School of Rock, Law & Order, The Agency, The Education of Max Bickford, and Montana.

She has also produced 2018 Madero which is a thriller about an undercover DEA cop with the New York department struggling to overcome his past.

Elisa was born on 2nd April in Bronx, New York, USA. She is private about her family. In the year 1993, she graduated from Syracuse University.

Elisa is also a football fan. She is seen tweeting about NFL most often. She and her husband Keegan went to see live football games like the Detroit Lions game in 2017.

Elisa Pugliese and Keegan-Michael Key got engaged in November 2017 which was shared by Keegan. Keegan shared the news through Twitter and wrote,

“She shows me every day that each one of us has the ability to help make the world a better place. I’m the luckiest man ever. She said yes!”

Also read Whitney Way Thore calls off her engagement to Chase Severino due to his infidelity!

Previously Keegan was married to Cynthia Blaise whom he divorced in 2017. After that, Keegan and Elisa walked down the aisle on 8th June 2018.

Their wedding was a small ceremony attended by close friends and family. Jordan Peele also attended the wedding. Elisa was on knee-length ivory Prada dress, while Key donned a suit by Paul Smith.

Pugliese carried a bright spray of orchids designed by Elan Flowers. Keegan posted a picture of them sharing a sweet kiss on a cobblestone street in NYC and he wrote,

Even though their wedding was a low-key ceremony but they had an extravagant reception. The reception was attended by Stephen Colbert to Cobie Smulders, Michael Strahan to Fred Savage, Paul Rudd, Robert Kennedy Jr., Cheryl Hines, and Taran Killam.

It was held at One World Observatory in New York City, and guests wore appropriately fancy duds for the event.

Elisa Pugliese was wearing a deep purple Pamella Roland gown and was still with the orchid theme with arrangements also by Elan Flowers.

Keegan and Elisa joined the band with a soulful rendition of “Tennessee Whiskey.” Their function had fresh sushi and a smorgasbord of meats with a steak carving station. Their wedding cake was a five-tier light blue wedding cake.

“It’s a truly amazing thing when you can find someone who brings happiness and joy to your life. And more importantly helps you to share that happiness and joy with others. Before I met her I didn’t even know that was possible. … It was a magical and perfect evening.”

“I had a very small wedding in my apartment, but on the weekend, my wife Elisa and I had a party which was basically a prom,”

Keegan and Elisa have traveled to many places together. Similarly, they have attended the IRC Rescue Dinner in New York City, the BAFTA Tea Party event, and the 2017 Tony Awards.

On 11th June 2019, they were spotted together at the world premiere red carpet of Toy Story 4 at El Capitan Theater in Los Angeles, California, USA.

Keegan-Michael Key is an American actor, comedian, writer, and producer. He is best known for starring in the Comedy Central sketch series Key & Peele from 2012 to 2015.

He currently appears as Mark Rodriguez in the USA Network comedy series Playing House since 2014. Michael spent six seasons as a cast member on MADtv and has made several guest appearances on Whose Line is it Anyway? Read more bio…

Jordana Brewster and her producer husband Andrew Form are divorcing after 13 years of marriage!
Tags : Better Off Single Film producer