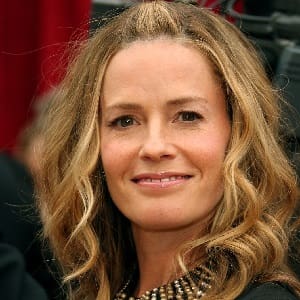 I may look like the girl next door, but you wouldn't want to live next door to me.

[on acting] The darker, more complex and emotional the part is, the easier it is for me. But I don't take any of that stuff home with me at the end of the day.

My childhood was male-dominated. It was great, but also very painful. Looking back after years of therapy, I realize that my wanting to act had nothing to do with making money and everything to do with needing attention and wanting to express myself and investigate my sexuality.

I was never put in jail. But, oh God, I smoked a lot of pot

Elisabeth Shue is a married woman. She is married to film director Davis Guggenheim.

They married in August 1994. The pair has three children together: Miles William, Stella Street, and Agnes Charles.

Who is Elisabeth Shue?

Elisabeth Shue is an American actress.

People mostly know her roles in movies including ‘The Karate Kid’, ‘Adventures in Babysitting, ‘Back to the Future Part II’, ‘Hollow Man’, and ‘The Saint’ among others.

She has garnered the prestigious Academy Award and Golden Globe Award nominations for her performances.

She was born in Wilmington, Delaware as Elisabeth Judson Shue on October 6, 1963.

She was born to parents James Shue and Anne Harms. Her father was a one-time congressional candidate, lawyer, and real estate, developer.

Her parents separated when Shue was nine years old. Additionally, she has three brothers: William, Andrew, and John.

She became interested in the world of acting in her childhood years he is of American nationality.

Furthermore, she belongs to a mixed ethnic background of German, English, and French Huguenots.

In addition, she also attended Wellesley College and later transferred to Harvard University.

She completed her B.A. in political science in 2000.

She initially began acting in television commercials. In 1982, she had a minor role in the TV movie ‘The Royal Romance of Charles and Diana.’

Later, she appeared in ‘Somewhere, Tomorrow’. Additionally, in 1984, she played Ali in the movie ‘The Karate Kid’.

She appeared as Jackie Sarnac in the TV series ‘Call to Glory.’ Since then, she has appeared in numerous other movies and television series.

All in all, she has over 50 credits as an actress.

Some other movies and television series that Shue has appeared in are ‘Battle of the Sexes, ‘Blunt Talk’, ‘CSI: Crime Scene Investigation’, ‘Behaving Badly’, ‘Chasing Mavericks’, ‘House at the End of the Street’, ‘Hope Springs’, ‘Waking Madison’, ‘Janie Jones’, ‘Curb Your Enthusiasm, ‘Don McKay’, ‘First Born’, ‘Dreamer: Inspired by a True Story, ‘Mysterious Skin’, ‘Molly’, ‘Palmetto’, and ‘The Trigger Effect’ among others. Furthermore, Elisabeth also has 2 credits as a producer.

She garnered the Academy Award nomination in 1996 for her performance in ‘Leaving Las Vegas.

She has not revealed her current salary. However, she has an estimated net worth of around $20 million as of 2022.

Has she won any awards?

In addition, she has also garnered the Golden Globe and BAFTA Film Awards.

She was part of a minor controversy due to her appearance in the movie ‘Leaving Las Vegas.’

The movie was considered to be too explicit. At present, there are no rumors concerning Shue and her career.

Furthermore, her hair color is blonde and her eye color is light brown.