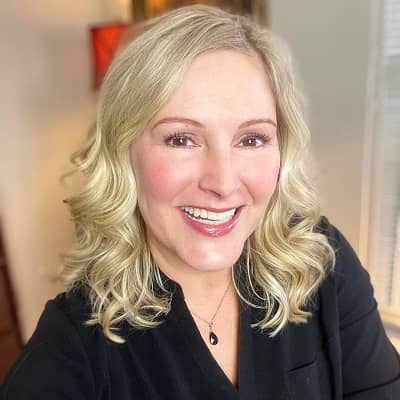 The well-recognized actress, Elise Baughman is currently single and is not dating anyone. Similarly, she has not revealed any of her past affairs and relations till now.

It seems that Baughman does not prefers to expose her details and has maintained her profile low-key.

Who is Elise Baughman?

Also, Baughman has worked for anime series at Funimation and New Generation Pictures.

Elise Baughman was born on 20 June 1972. At present, her age is 48 years old. Likewise, her birthplace is Monroe, Louisiana, the USA.

Talking about her nationality, Elise holds an American identity whereas her ethnicity is Caucasian.

Not much known about her parents, Elise hardly confronts the media and public to share her details. Her siblings’ details are also not disclosed till now.

The multitalented personality, Elise Baughman is a well-recognized actress as well as a TV host. Moreover, she has also worked as a voice-over actress. On the public, Baughman has emerged in many films, TV shows, national commercials, corporate videos, and print campaigns.

She has worked in movies like ‘I am Gabriel’ and ‘Hoovey’. Similarly, Baughman has served as a voice actress on TV series on NBC and the USA Network.

She has a link with many corporate and commercial clients such as retail, communications, technology, security, medical, food, banking, and automotive industry.

Being a TV host, the anchor has presented in everything from hosting morning talk shows- to traveling the nation on TV.

Additionally, she has interviewed celebrities on the red carpet in Los Angeles. The interviews included some celebrity names such as Ray Romano, George Lopez, Alyssa Milano, Cedric The Entertainer, and Michelle Kwan.

Baughman is a master in teleprompter and media skills and has also trained people like a country music artist with her show on a country network, including Chief Strategist of Standard & Poors.

Being a Voice talent, Elisa has done voice-over thousands of radio and TV advertisements. Furthermore, she has also voiced multiple animations and anime characters.

Elise has played the voice over of the following series: –

The multi-talented personality earns handsome money from her multiple profession. She is connected to The Campbell Agency from 2001 till now.

It is reported that she has an estimated net worth of $2 million.

However, Elise has never revealed her exact salary, earnings, and assets details till now.

Elise is very tight-lipped. She has never been part of any rumors or controversies till now.

It seems she maintains distance from the public and media to enjoy her personal life blissfully.

A versatile personality, Elisa has a beautiful texture and charming looks. Elise stands at a height of 5 feet 5 inches. Moreover, she has a balanced bodyweight.

Baughman has brown hair as well as the brown eye. Nevertheless, she has not shared her other physical details yet.

About her social media presence, the well-recognized personality is silently active on social media. Baughman has more than 1.7k followers on her official Instagram account @elisebaughman.