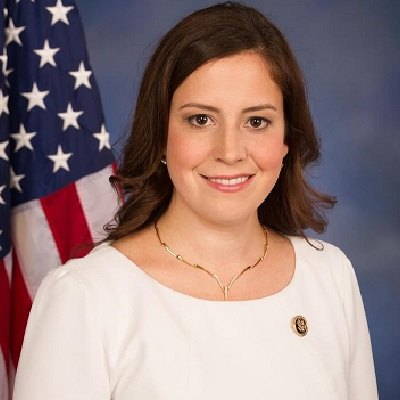 Elise Stefanik is married to Matthew Manda on the 19th of August 2017 in Saratoga Springs, New York. Matthew is involved in the marketing and communication business.

In the wedding ceremony, she wore beautiful ballgown with shoes from Rene Caoveilla.

The bride was accompanied by three bridesmaids and a flower girl. After the wedding ceremony, they hopped into the vintage Corvette and made their way to their reception venue along.

Currently, the couple is living a happy life in Schuylerville, New York.

Who is Elise Stefanik?

American Elise Stefanik is a politician. She is currently serving as the U.S. Representative for New York’s 21st congressional district.

She happens to the youngest Republican woman to be elected in Congress.

New York congresswoman is very concerned about the matter of the Corona Virus and its spread to the New York States.

Currently, she is asking for the rural medical facilities and equipment assured for her state. Apart from that, she is also concerned about the economic challenges they will face due to the virus.

Hence, she wants economic relief and rescue packages for the small business. She also mentioned that those businesses not only requires low-interest loans but also forgivable loans.

She was born as Elise Marie Stefanik on the 2nd of July 1984 in Albany, New York. She is of Polish ethnicity.

Her father, Ken Stefanik and mother Melanie Stefanik are into the wholesale plywood business.

She has a brother, Matt Stefanik who is an entrepreneur.

She graduated from the Albany Academy for Girls from his hometown. Later, in 2006, she earned a Bachelor’s degree with Honors in Government from Harvard University.

– After graduation, Elise Stefanik started her career as a staff of the Domestic Policy Council of President George W. Bush.

– In August 2013, she named herself as the candidate for the United States House of Representatives in New York’s 21st congressional district. Winning the election, she became the youngest Republican woman to be elected for Congress.

– Later, in January 2015, she was appointed to be in the House Armed Services Committee. One month later, she became the vice-chairperson of the committees’ Subcommittee on Readiness.

-In 2016, she won the reelection of the general election against the Democrats like Mike Derrick, Green Party, and Matt Funiciello with the majority. The same year, she supported Donald Trump of the president.

– In 2019, she stood against the Impeachment inquiry against Donald Trump.

She has an estimated net worth of $2 million that includes her townhouse near Capital Hill. In 2014, the townhouse was valued at $1.3 million.

In 2019, Impeachment inquiry against Donald Trump created a huge buzz in the world. In the matter, she supported the president by announcing that she doesn’t support that.

Also, she became a key defender for the president. During the hearing that took place on the 15th of November, she even accused committee chairman, Adam Schiff, of making up the rules as he goes.

Elise Stefanik is a brown-eyed brunette. Her height is 5 feet and 4 inches and weighs around 59kg.

She also has a self-titled YouTube channel with 1.15k subscribers.