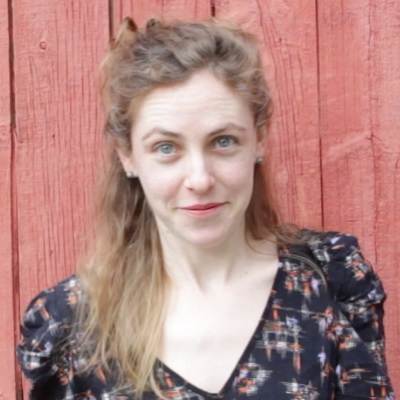 Eliza Bent is happily married to Dave Malloy. Her husband is a playwright, lyrist, and composer by profession.

The couple married in August 2014. The wedding took place at St. Francis de Sales Church in Phoenicia N.Y. The marriage was officiated by Charles I. Clough, a Roman Catholic deacon.

Who is Eliza Bent?

America Eliza Bent is a playwright, performer, and professor. She is renowned for her plays at the off-broadway and Abrons Art Center.

She is a founding member of Half Straddle theater company in Brooklyn.

Eliza Bent was born on 30th May 1982 in Brookline, Massachusetts. She is of British ethnicity.

To date, she has not shared any details on his family background including his father, and mother. She has a sister. She shared her pictures on Instagram.

Moving toward her academics, in 2000, she joined Boston College. In 2004, she earned a bachelor’s degree from the university with Honors in Arts minor in Theatre Arts.

During their University days, she was used to be a member of the Phi Beta Kappa, Cross, and Crown Honor Society. In the senior year, she received the Cushing Award for Creative Writing.

In 2010, she enrolled at the City University of New York -Brooklyn College. From the university, she earned a master’s degree with Honors in Arts majored in playwrighting and screenwriting in 2014.

In January 2006, Eliza Bent started her career as an editorial assistant. However, she remained in the post for 8 months only. After that, she joined Theatre communications Groups as Senior editor. In August 2013, she became an Adjunct Professor at Brooklyn College.

Being a passionate playwright and performer, she is attached to performing arts including writing plays, performing, and producing. Some of her theater plays along with the year and theater are-

Apart from that, she also makes through her performance in theater plays too.

Eliza Bent is a blue-eyed brunette. She has a decent height and weight. Details on her body stats are not available.

As of now, she has managed to maintain distance from any type of controversy. Also, there are no rumors linked to him.