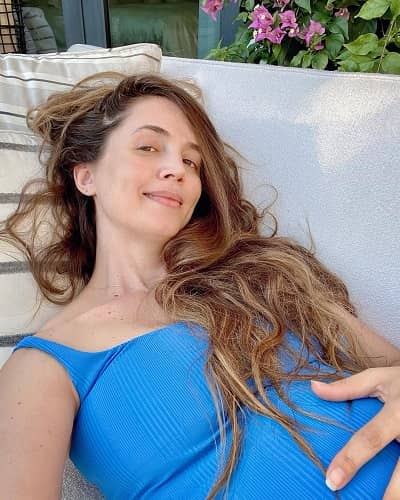 One of the pictures was of her growing baby bump, the second was of their son Philip wearing a ‘Big Brother’ t-shirt and the third picture was of two beautiful red flowers.

Eliza is yet to give more details on her second pregnancy. It seems like the Palandjian family is expanding their family.

Also read Shenae Grimes pregnant with her second child! Know about her net worth in 2021 and few quick facts

At the wedding, Eliza wore a lace gown with a small train and cutout back. Likewise, her handsome beau wore a navy suit sans tie. Their ceremony was held in the Boston Public Library courtyard.

Their alter was surrounded by large planters cascading with white flowers, greenery, and dozens of lanterns. Even though they kept their relationship private, they announced their engagement in June 2017. Initially, they had kept their wedding a secret for almost a month before announcing it on 16th September 2018.

How much is the net worth of Eliza Dushku?

Eliza Dushku has an estimated net worth of $20 million as per Celebrity Net Worth. In July 2020, Eliza listed her Hollywood Hills house in the market for $1.849 million.

The house was built in the 1950s and sits on a quarter of an acre of land. The house consists of Saltillo tile floors, high ceilings, and skylights that flood the interior with natural light. It also has a set of French doors open to a tiled patio and gardens in the backyard.

Also read Mandy Moore can’t wait to welcome a baby with husband Taylor Goldsmith! Know about their married life, net worth in 2021

Eliza Dushku is a hot and beautiful American actress and model who is widely eminent for her work as an actress in the television series ‘Buffy the Vampire Slayer’ playing the role of ‘Faith’ and also as Tru Davies in the Fox Series ‘Tru Calling’. She is also popular for her role as Echo / Caroline Farrell in the series ‘Dollhouse’. Read more bio…

Is Susan Kelechi Watson married? How much is her net worth in 2021?
Tags : Actress Bring It On