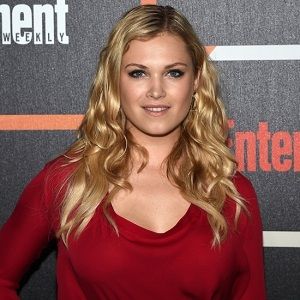 Being on Twitter and social media, you obviously get to see a lot more of what people are thinking of you and of your show

I started on 'Neighbours' when I was 14. It's crazy to think now that I had such a bizarre adolescence

I was always on set, I was always working, so my study was down to the bare minimum required. So I am one of the few who didn't study 'Lord of the Flies.' R

What is the relationship of Eliza Taylor?

Eliza Taylor is n married woman. She exchanged vows with an actor named Bob Morley. The wedding was held on 06 May 2019.

However, she has been linked up with many dashing guys. In 2003, Eliza began to go out with actor Lincoln Lewis. They dated for a year and later broke up due to some privacy issues.

Moreover, she confirmed her relationship with 35 years old actor Brett Tucker in 2008. Later, the pair couldn’t continue their relationship and split up.

Furthermore, there was a rumor that Eliza is in a relationship with Jason Sanford. As she posted a kissing photo of her with him stating ‘Miss This One.’

Back in 2016, her name also linked up with American actor George Tchortov. in addition, she posted a photo with him in a bed with the caption’ Yes I am Happy’. As per the reports, the pair have split up.

Who is Eliza Taylor?

Eliza Taylor is a renowned actress from Australia. Eliza Taylor came into the spotlight after appearing in the Australian soap opera Neighbours in 2005.

Furthermore, she got huge recognition for her role as Clarke Griffin on The CW series The 100.

Eliza Taylor was born on  October 24, 1989, in Melbourne, Australia. She has two siblings a brother and a sister. Talking about her early life, Eliza grew up with her mother after her parents got separated.

Furthermore, her mother is a graphic designer and an author and her step-father is a comedian. While her biological father used to run a cafe in Melbourne.

Concerning her education, Eliza completed her high school education at Calder High School. In her childhood, she wanted to become a marine biologist.

However, in her teens, she began to take part in various dramas and started to learn acting.

Eliza Taylor began his professional acting career in Pirate Islands as a lead actress. Prior to Neighbours, she appeared in a couple of TV series The Sleepover Club and Blue Heelers in 2003.

Her breakthrough role came in the Australian soap opera Neighbours in 2005. Eliza grabbed the role of Janae Timmins after starring in a guest role in 2003.

As she featured in the Neighbours, she stole the limelight and her role was also critically acclaimed. Moreover, she has also featured in a short comedy movie named The Laundromat followed by 6plots and Winners and Losers.

In 2017, she appeared in a movie, Thumper as Kat Carter alongside Daniel Webber as well as in Christmas Inheritance. In addition, she has also featured in several series which include Rush, Nikita, City Homicide, and much more.

Recently on 2022 she played the role of Doctor Villka in the American science fiction comedy-drama television series.

As an actress, she has been extremely successful and bagged an enormous amount of money. As per the reports of 2022,  she has a net worth of $3 million.

So far, Eliza hasn’t won any awards. However, her works have been always appreciated and loved by her fans. In the near future, she will definitely grab some awards.

As of now, there are no desperate rumors regarding her professional life.

It seems she has been doing her job without affecting others. She is pretty focused on her work rather than on other stuff.

Eliza Taylor is a gorgeous Australian beauty with a height of 5 ft 5 inches and weighs 57 kg.

Furthermore, she has attractive blue eyes and gorgeous blonde hair.

Currently, she has more than, she has a massive fan following on Instagram with over 1.2 million followers and more than 520k followers on Twitter.