Actress Elizabeth Banks is married and a mother of two. 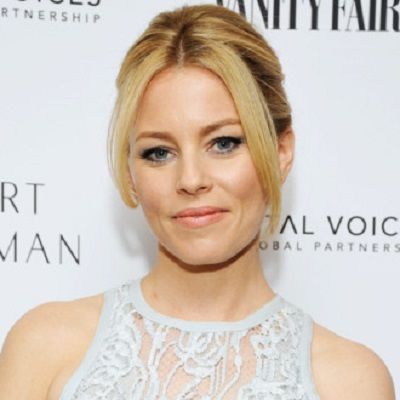 It's okay to lose. Losing teaches you something. Having to try and going through the trials and tribulations to actually overcome, to get there to win, to triumph, that's what makes life interesting.

Someone told me that having a baby is like having your heart walking around outside of your body, and I didn't understand it until I had a baby. Now, like, everything he does literally crushes my heart. In a great way. And then if he's in pain, it's like my whole endeavor is to make sure he's not in pain.

I am not afraid of much. I kill all the spiders in my house, and I'm planning to go skydiving. I am into girl power, and I'm very self-sufficient.

Elizabeth married sportswriter and producer, Max Handelman. They wed in the year 2003. She converted her religion into Judaism post marriage.

She first met her husband, Max on the first day of their colleagues at the University of Pennsylvania on September 6, 1992.

Who is Elizabeth Banks?

Elizabeth Banks is an American actress and filmmaker. She became known for significant roles in The Hunger Games film series and the Pitch Perfect franchise.

She started her career on television and went on to gain immense popularity through her sheer performance in films including the Spider-Man trilogy, Seabiscuit, The 40-Year-Old Virgin, The Lego Movie, and Power Rangers.

Elizabeth Banks was born on 10th February 1974 in Massachusetts, United States. Her father, Mark Mitchell was a Vietnam veteran. Later he started working for General Electric as a factory worker. Her mother, Ann Mitchell worked in a bank.

While growing up, Elizabeth had the personality of a tomboy. She used to ride horses and play baseball. Banks first stepped into the world of acting in her childhood when she appeared in a school play. She has a younger brother, Geoff Mitchell.

Bank’s is an actress, producer as well as director in the industry. However, she moved to New York and started acting in the year 1998 doing minor roles in TV and movies. She got an appreciation after being featured in Surrender Dorothy in the year 1998. It was her debut and the movie is based on drug addiction.

She has been featured in the comedy series, Sex and the City. Other mega movies in which she was starred were Spiderman, Spider-Man 2, The 40-Year-Old Virgin, Pitch Perfect, etc.

In addition to this, her character in films like Seabiscuit of the year 2003 and Role Models of the year 2008 is also considered as an appreciable work undertaken by him.

And after that, she worked in various movies and is part of many other successful Hollywood movies. It was in August 2005, she appeared in William Inge’s Bus Stop as Cherie.

Banks also appeared in one of the American football drama films Invincible playing the role of Mark Wahlberg in 2006. In the year 2007, she played the female lead in the comedy film Meet Bill.

Moreover, in 2018, Banks co-starred as Jenny in the comedy film The Happytime Murders, alongside Melissa McCarthy and Maya Rudolph.

She has up to now owned and been nominated in various awards. In 2016, she won Best Vocal Ensemble in a Video Game in BTVA People’s Choice Voice Acting Award and also in BTVA Video Game Voice Acting Award. Likewise, in CinemaCon, USA, she won Breakthrough Filmmaker of the Year (2015) and Excellence In Acting(2013). Furthermore, in the Las Vegas Film Critics Society Awards 2015, she won Best Supporting Actress. Moreover, she gets nominated for various other awards.

In addition to her successful acting career, Banks made her directorial debut with Pitch Perfect 2, the second installment in Pitch Perfect film series.

The film was made with $30 million and went on to make $300 million worldwide. She also has produced around half a dozen movies and considering all other factors, her net worth is sure to rise in the years to come.

She has maintained a good relationship with all other people in her personal and professional life. And so she hasn’t been in any rumors and controversies.

She is active on different social media platforms. She has her account on Twitter with over 2.27M followers. Moreover, she uses Instagram and has more than 2.7 M followers on it. Her Facebook page also holds up to 1M followers.