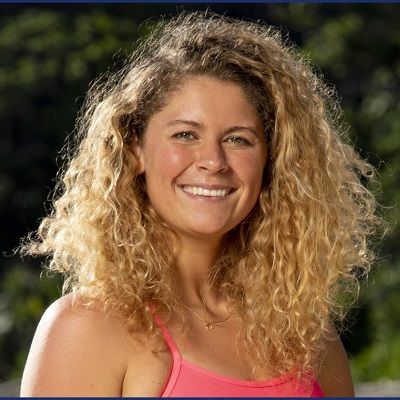 I realise that swimming isn't a rest-of-my-life career. I have chosen to enjoy what I do or else I would end up miserable going through the motions.

Is Elizabeth Beisel dating someone?

Elizabeth Beisel is in a relationship.

After getting evicted from the reality show Survivor: Island of the Idols, she started to date fellow contestant Jack Nichting.

Who is Elizabeth Beisel?

Elizabeth Beisel is an American swimmer and has participated in international-level swimming competitions.

She has specialized in backstroke and individual medley swimming styles.

Recently in 2019, she was seen in the reality show Survivor: Island of the Idols.

Elizabeth Beisel was born on 18 Aug 1992 as Elizabeth Lyon Beisel.

Her birthplace is South Kingstown, Rhode Island, US. Her mother’s name is Joan and her father’s name is Ted. She has Caucasian ancestry.

Then she attended the University of Florida, Florida.

Elizabeth competed in competitions while in college. There she won several championships including nine times Southeastern Conference (SEC) individual championships. Then she was awarded SEC Female Swimmer of the Year in 2012.

Elizabeth Beisel also took part in several international levels. She first competed in the 2007 World Championship and came twelfth. Then in the 2008, 2012, and 2016 Summar Olympics, Beisel finished fourth, third, and sixth respectively.

She also participated in the 2009 World Championship and came third in the 200m backstroke and fifth in the 400m individual medley.

Elizabeth participated in the 2011 World Aquatics Championship. In the 200m backstroke final, she finished in the fifth position. In the 400m individual medley, she won a Gold medal.

It has a total of 20 castaways which were divided into two tribes, Cairo and Vokai. Each tribe has 10 contestants.

She has a net worth of around $1 million.

Talking about body measurements of Elizabeth, she has brown eyes and blonde hair.

She is also on Facebook with more than 15.7k followers.

You may also like to read the education, early life, career, affairs, body stat, and social media of Maria Canals-Barrera, Gavin Houston, and Adam Gregory.