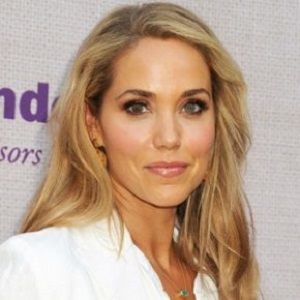 I typically enjoy a beautiful beach destination, as I find the water and sand to be the most replenishing

I will never forget experiencing Venice for the first time. It feels like you are transported to another time - the art, music, food and pure romance in the air is like no other place

I just love creating an environment where people can open up and say what's on their mind and in their heart.

Elizabeth Berkley is married to Grey Lauren who happens to be a professional and a successful nude painter. They met each other in a dance class in 2000 and after getting to know each other more they married got married on 1st November 2003 at the Esperanza Hotel in Cabo San Lucas, Mexico.

After her marriage, she changed her name to Elizabeth Berkley Lauren as of her husband Grey Lauren. She gave birth at the age of 39 to her first child Sky Cole on July 20, 2012. They are still living happily together setting a perfect example of successful married life.

Who is Elizabeth Berkely?

Elizabeth Berkley is an American actress, a dancer as well as an author who is best known for her work in the friendly family American television show “Save By The Bell” on which she made an appearance as a feminist Jessie Spano and as an exotic dancer Nomi Malone in Paul Verhoeven film ‘Showgirls’.

Elizabeth Berkley was born on 28 July 1972 in a Jewish family in Michigan, USA. Her nationality is American and ethnicity is Ashkenazi Jewish.

By profession, her father Fred is a lawyer and her mother Jere owns a gift basket business. She has an older brother Jason and they were raised in the tradition of Judaism where at the age of 13 sons/daughters has to go through the tradition of Bar/Bat Mitzvah. Being fond of dancing her father admitted her at Detroit Dancing Company. She is a strict vegetarian girl.

While she was studying in school at the age of 13, she was offered a contract as a model.

Elizabeth received her formal education from Cranbrook Kingswood school which is a private school in Bloomfield Hills and later on, she graduated from North Farmington High School in 1990. She got a degree in English Literature from UCLA and entered into the United Talent Agency.

In 1987, Elizabeth made her first appearance through the television film ‘Frog’ playing the role of Kathy and in 1989 she auditioned for the role of Kelly Kapowski on ‘Saved By The Bells’ but landed a role of Jessie Spano. She played the character as Jessie Spano from 1998 to 1993 and by the time when she was done with it, she was already a well-known television personality.

After that, she auditioned for the Paul Verhoeven big budget film ‘Showgirls’ and got a role as Nomi Malone. Her career started to blossom with the hard work and dedication of her acting. Elizabeth had even hosted Bravo’s reality television dance show ‘Step it up and Dance’ which was a competition among 10 dancers and the one winner gets the cash prize of $100,000 along with the opportunity to work and perform with the country’s top choreographers.

She has done many movies and the television series gaining the name, fame and fan followers everywhere. She won National Board Review (NRB) award for best cast in the comedian movie based on a famous novel ‘The First Wives Club’ in 1996. Elizabeth had found a group of young girls and named Ask Elizabeth where they share discuss their problems and self-help each other in 2006. Later in 2011, she published a book entitled ‘Ask Elizabeth: Real answer to everything you secretly wanted to ask about love, friends, your body…. and general life’.

Although the salary of her is hard to put up on an actual figure, her net worth is estimated to be $6 million living a luxurious life with her family. Elizabeth is also an active animal right activist.

Elizabeth has set her life in a successful way having rumors neither on her career growth nor on her personal life.

Moving towards her body measurements, she has a good height of 5 Feet 10 Inches with body weight 59kg. She has a well-shaped body of 34-23-36. Her bra size is 34C. Her hair color is blonde. She was born with heterochromia due to which her right eye is half green and half brown whereas her left eye is all green.

Also know more about the early life, career, net worth, relationships, and controversies of other actresses, a dancer including Julie Carmen, Becca Tobin, Jasmine Guy, Holly Taylor, and Katherine Bailess.