Elizabeth Gillies is an American actress, singer, producer, and songwriter. S he is married to Michael Corcoran.

Elizabeth Gillies is currently married. She announced her wedding information via Instagram. On 8 Aug 2020, she exchanged vows with a music composer Michael Corcoran.

Their previous wedding was on April 25, but due to the COVID-19 pandemic, this couple postponed it.

She once had a very strong relationship with the American actor Logan Miller whom she dated in 2011.

Surprisingly, they separated in June 2011. Even though their relationship lasted for only 5 months, they were able to get huge public attention. 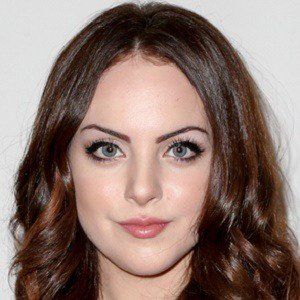 If someone's being less than courteous to you, I don't think you need to pay any attention to them.

If you're passionate about something and stick with it, even if your friends aren't doing it, it'll pay off. It can be really rewarding to stick to your guns.

Who is Elizabeth Gillies?

Elizabeth Gillies is an American actress, singer, producer, and songwriter. She is known for her starring role on Broadway as Lucy.

She also had a role in the 2014 horror film Animal and was cast as Fallon Carrington in The CW television series Dynasty.

Born to Gregory Gillies who owns a band and Pamela Gillies, Elizabeth has one younger brother named George Gillies born in 1996.

Although she is of American nationality, she has Italian (from her maternal grandmother), Irish, English, and Scottish ancestry. Born and raised in Haworth, New Jersey, she follows the Roman Catholic religion.

Elizabeth Gillies did her schooling in Haworth Public School in her hometown. After completing her school, she went to Northern Valley Regional High School at Old Tappan.

She speaks both English and Spanish language. Unfortunately, she had to leave high school in freshman year and did online schooling and got tutoring for about 5 hours each day on set.

Since 2017, Elizabeth Gillies has been cast as Fallon Carrington in The CW television series Dynasty, a reboot of the 1980s series of the same name. Gillies has starred in a comedy movie ‘Arizona’ directed by Jonathan Watson which was released on 20th January 2018 in the US.

Elizabeth Gillies began her acting career at the age of 12 in 2005 when she went for an open casting call and then began appearing in commercials for companies like Virgin Mobile.  She debuted in acting in the TV series, The Black Donnellys where she portrayed the role of Young Jenny. She worked as Lucy in a Goodspeed production of Jason Robert Brown’s new musical, 13 in 2008 and 2009.

From 2010-13, she played Jade West in the Nickelodeon television series Victorious. In 2017, she joined the cast of Dynasty as Fallon Carrington. Her outstanding performance led her to appear in several movies including Vacation, Animal, Winx Club, and Television series including The Battery’s Down, Big Time Rush, The Exes, Killing Daddy, Dynasty, White Collar, and much more.

Besides her acting career, Elizabeth is also a singer. Elizabeth has sung the songs like Die Trying, Bang Bang, We Are Believix, You Don’t Know Me, and also appeared in Freak the Freak Out, Beggin’ on Your Knees, Make It in America, Time in the Day, and much more.

Moreover, some of her well-known covers include “Wild Horses” by The Rolling Stones, “Jealous Guy” by John Lennon, “Father & Son” by Cat Stevens, and “Fast Car” by Tracy Chapman. She also recorded a duet with Ariana Grande for the Freak Out movie soundtrack.

She was once rumored to be dating her Victorious co-star Avan Jogia. Similarly, people start claiming that Elizabeth and Mike Backhouse are dating after Elizabeth posted the pictures of Mike’s pet dog and their couple selfies.

Later, She was also rumored to be dating the American actor and singer James Maslow.

Elizabeth Gillies stands at a height of 5 feet 7 inches and weighs about 60 kg. She has a well- maintained body with a measurement of 36-27-34 inches.

Elizabeth has a bra size of 32D, a shoe size of 9, and a dress size of 8. She has blue-green eyes with natural hair color brown.