Elizabeth Henstridge is currently in a romantic relationship. She met Zachary Abel and started to date him in 2012. Her boyfriend is an actor who is popular in the TV series Make it or Break it.

Being together for seven years, this couple took their affair to the next level and announced their engagement. They shared the news on 22 April 2019 via an Instagram post. 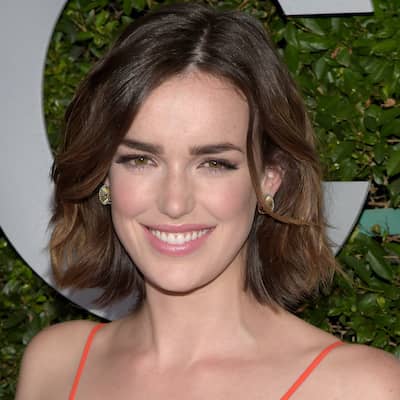 Who is Elizabeth Henstridge?

Elizabeth Henstridge is a British actress, model, and fashion designer. She is also a YouTuber and a podcaster.

Elizabeth is known for appearing in Agents of S.H.I.E.L.D. (TV Series) where she played the role of Jemma Simmons.

She also directed 45 episodes of Live with Lil! AGENTS OF SHIELD and an episode of Agents of S.H.I.E.L.D.

Her birthdate is 11 Sep 1987 but she was born in Sheffield, South Yorkshire, England, United Kingdom. Her full name is Elizabeth Frances Henstridge. The names of her mother and her father are unknown.

Elizabeth’s ancestry is English-Irish and has two sisters. Their names are Helen and Catherine.

As per her academics, she studied at Meadowhead School and King Edward VII School. Then she graduated from the University of Birmingham and took acting training at East 15 Acting School.

Elizabeth Henstridge started her acting career with a 2010’s short film titled Easy Under the Apple Bough. Her other two short projects are And the Kid and Delicacy.

At present, she is busy filming another TV show Suspicion as Tara. Some of her other acting credits are,

Her net worth is said to be around $3 million as of 2021. But, the salary and other earnings from her career are not disclosed.

This Suspicion star is keeping herself away from rumors and desperate scandals.

Regarding Elizabeth Henstridge’s body features, her height is 5 ft 4 inches and her body weight is 53 kg.

Moreover, her eyes are green and her hair is dark brown. Her skin complexion is fair but her body stats are unknown.

Similarly, she has gained more than 73k subscribers on her YouTube channel.