Elizabeth Holmes at present is in an engaged relationship. She exchanged rings with William “Billy” Evans in early 2019. Her fiancee is an heir to Evans Hotels group.

As per some sources, this couple got married in a secret ceremony but neither one of them has said things officially regarding this rumor. In July 2021, Elizabeth together with her partner gave birth to a son.

She was in a living relationship with technology entrepreneur Ramesh “Sunny” Balwani whom she met in 2002. Besides having an age gap of 19 years, they started to date each other.

He divorced his wife to be with Holmes and they together moved in 2005. He joined Theranos in 2009 and left in 2016. But the reason for his departure is not clear. Some said he left on his own while some say Elizabeth fired him.

This romance also lasted till 2016 and accused Ramesh of being controlling. She added he many times berated and sexually abused her. 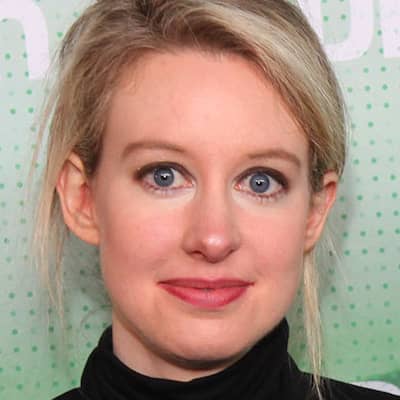 Who is Elizabeth Holmes?

She is the chief executive of the company. Her name was put in The World’s 19 Most Disappointing Leaders list by Fortune in 2015.

This businessman in March 2018 was accused of securities fraud along with Holmes. It was said that they raised over $700 million through this fraud.

They were charged with not one or two but nine wire frauds case including investors, doctors, and patients. Recently in early Jan 2022, she was found guilty in four cases of defrauding investors. As punishment, she has to serve 20 years in prison and will pay a fine of $250,000 for every proven case.

Her birthdate is 03 Fen 1984 and she was born in Washington, D.C., the United States as Elizabeth Anne Holmes. The name of her mother is Noel Holmes and her father is Christian Holmes IV.

Elizabeth’s ancestry is Caucasian and has a brother Christian Holmes V.

As per her academics, she attended St. John’s School and then Stanford University but never completed her studies.

Elizabeth Holmes started a health technology company named Theranos in the year 2003. It deals in special blood tests for which only a small amount of blood is needed. She was the chairwoman and CEO.

But this firm has faced several accusations regarding their product. The blood-testing device made by this company was declared inaccurate by The Wall Street Journal in Oct 2015. There were also other problems with Theranos and CMS banned the operation for two years in 2016.

Then finally on 04 Sep 2018, the firm announced it will shut down its operations and will distribute all of its assets.

From the data of 2022, her net worth is not yet published. But in 2015, Forbes declared she has a net worth of around $4.5 billion (estimated). But due to the fraud about Theranos, it updated her net worth at zero.

The annual salary from her work life is not yet revealed.

Elizabeth Holmes’s height is 5 ft 5 inches and her body weight is 65 kg. Adding more, she has beautiful blue eyes and has hair in light brown color.