Elizabeth Hurley is an English actress and model. 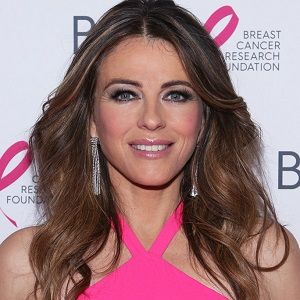 I love to see other women in pink. It's good for every shade of skin and hair

I've always wanted to be a spy, and frankly I'm a little surprised that British intelligence has never approached me.

What is the relationship of Elizabeth Hurley?

In 1987, when Elizabeth Hurley was a relatively unknown actress, she met British actor Hugh Grant on the sets of a Spanish movie ‘Remando Al Viento’, starting a well-publicized relationship with him that was to last till 2000.

In 1995, Grant was arrested in Los Angeles for his dalliance with a prostitute ‘Divine Brown’ following which, Hurley surprised everyone by not separating from him.

In 2000, Hurley and Grant separated, albeit on good terms, and have remained friends ever since. They both also continued with ‘Simian Films’, their business enterprise.

In 2002, a son was born to Hurley, namely, Damian Charles Hurley. The boy’s father, American producer Steve Bing, initially refused to acknowledge Damian as his son and eventually took a DNA test that confirmed him as the father.

In 2002, Hurley started a relationship with Indian business magnate Arun Nayar, and in 2007, they got married in 2 ceremonies, first at Sudeley castle in England, and then at Umaid Bhawan Palace in Jodhpur. Hurley’s marriage ended in 2011 when she successfully filed for divorce, stating Nayar’s “unreasonable behavior” as the cause.

Later that year, she got engaged to Australian cricket legend Shane Warne. In December 2013, Warne and Hurley called off their engagement after a turbulent 2 months period.

In 2014, she dated David Yarrow. He is a hedge-fund financier and passionate wildlife photographer. They were having a great time together but due to some differences the couple eventually broke up.

At the current time, she is single. But she had revealed that she is still in touch with her exes.

Who is Elizabeth Hurley?

Elizabeth Hurley is an English actress and model, known for appearing in the films like Austin Powers: International Man of Mystery (1997) and in Bedazzled (2000).

She became famous after she was in a relationship with Hugh Grant, who is a British actor and producer.

Elizabeth Hurley was born on June 10, 1965, in Basingstoke, Hampshire, England, United Kingdom. Her nationality is American and ethnicity is mixed(English, Irish, French).

Her birth name is Elizabeth Jane Hurley. She was born to Roy Leonard Hurley(father), an army major and Angela Mary Hurley(mother), a school teacher at Kempshott Infant School. She has a sister, Kate Hurley and a brother, Michael James Hurley.

As a young person, she joined the ‘New Age Travelers’, a hipster bunch from the UK, before getting impacted by ‘punk mold’ which drove her to shade her hair and wear a nose-ring.

By the age of 12, Elizabeth definitely realized that she needed to be an artist and was enlisted in a private all-inclusive school, having some expertise in artful dance.

Afterward, she likewise earned a grant to study move and theater at the ‘London Studio Center’.

As a young lady, Elizabeth Hurley won a ‘Face of the year’ rivalry that was composed by a neighborhood daily paper and was compensated with a 1-year contract with a top organization in London. In 1987, she handled her first motion picture, ‘Aria’, a film that comprised of 10 short movies, all having diverse executives. The film highlighted in the ‘Cannes Film Festival’ of 1987.

From 1998 to 2000, she showed up in a significant number Hollywood films, for example, ‘Lasting Midnight’, ‘My Favorite Martian’, “EdTV” and ‘Stunned’. In 2000, she spurned a 5-month acting-strike by acting in business for ‘Estee Lauder’ and needed to pay a punishment of $100,000, forced by the ‘Screen Actors Guild’. That year, she acted in the show ‘The Weight of Water’, which likewise highlighted Sean Penn.

In 2001, she was a piece of ‘The Human Face’, a 4-section narrative about the impacts of outward appearances and elements. It was described by the British Actor-Comedian John Cleese. In 2002, she acted in the unsuccessful film, ‘Serving Sara’, whose disappointment drove her to quit acting in movies in the US and concentrate more on her demonstrating profession.

In 2005, she did demonstrate for the organizations ‘Saloni’, ‘Liverpool Department Stores of Mexico’, and ‘Lancel‘. That year, she likewise propelled her own beachwear line, ‘Elizabeth Hurley Beach’ at Harrods in the UK. In 2006, she acted in publicizing efforts for the brands, ‘Jordache’, ‘Shiatzy Chen’, ‘Got Milk?’, ‘Patrick Cox’, and ‘MQ Clothiers of Sweden’.

In 2006, she facilitated the British reality to indicate ‘Extend Catwalk’ and got a great deal of fire for it. She was supplanted in the following season since she purportedly had requested that the challengers send her free garments. In 2008, she both composed and demonstrated a case accumulation of 12 bathing suits for ‘MANGO’, a Spanish garment mark.

In 2011, she acted in the fifth period of the TV demonstrate ‘Prattle Girl’, where she depicted the character of ‘Diana Payne’, a rich specialist from Los Angeles. In September 2013, she was thrown in one of the E’s! initial two scripted pilots, The Royals, which was formally gotten in March 2014 and disclosed in 2015. The show arrangement, spinning around an anecdotal British Royal Family and set in present-day London, stars Hurley as the matron Queen Helena.

As of 2022, he has a net worth of $50 million through the endorsement of brands and revenues.

There has been an affair rumor floating around about former President Bill Clinton and model-actress Elizabeth Hurley. The rumor was started by Hurley’s ex-boyfriend Tom Sizemore. Sizemore was at the White House during Clinton’s administration for his movie “Saving Private Ryan”.

He claims the then President asked him about Hurley and got her number from him.

Also, the wedding had its share of controversies, as criminal charges were filed against Hurley and Nayar by a religious Hindu community in India, for violating wedding customs, followed by Nayar’s parents renouncing their son publicly.

She has an athletic body structure with light brown hair color and blue eye color.

Instagram posts! Liz Hurley is on a holiday in Maldives!