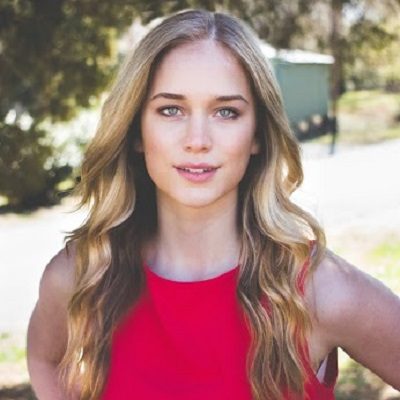 Previously, the actress of You was dating Julian Haig. Her Ex-boyfriend, Julian is also an actor by profession.

They started dating each other in 2015. At the time, they were spotted in Disney together. Also, she shared the pictures on her Instagram account. However, they broke up with each other at the end of 2016.

Who is Elizabeth Lail?

American Elizabeth Lail is a Saturn Award-nominated actress. Lail is famous for portraying the character Amy Hughes of Dead of Summer.

Last, in 2019, she featured in the TV series, You as Guinevere Beck.

Elizabeth Lail was born Elizabeth Dean Lail on the 25th of March 1992 in Williamson County, Texas. Her father, Franklin Lail is of Germanic ancestry. Her mother Kay Lurene Surratt is of British ancestry.

She has an elder sister. They were raised in Asheboro, North Carolina.

In 2010, she graduated from Asheboro High School in Asheboro, North Carolina.

– After graduating from High School, she started her career as an actress. In 2011, she debuted in the acting with the short movie, Model Airplane. In the 13-minute short family drama, she portrayed the character of Anna.

– After the first short movie, she took a break from the movie and focused on her studies and graduated from the University. In the same year, she resumed acting for the movies.

– In 2014, she made her appearance in the 15-minute short drama, Without as Emily. Following that, she was cast in the TV series, Once Upon a Time as Princess Anna. Altogether, she featured in the 10 episodes of the series.

– Moving forward, in 2016, she featured the series, Dead of Summer as Amy Hughes. The series turned out to be a milestone in her career. Later, she appeared in the series like The Blacklist and The Good Fight.

– In 2018, she made her debut in the movies with drama thriller, Unintended as Lea. Lea is the lead character of the movie and based on the storyline of her memory suppression.

Through her acting career, she has made her the net worth of $500k that includes her expensive dogs. Her earnings as an actress are in the range of $19k to $208k.

Also, with the number of followers on Instagram, she also earns it that is in the range of 5-digits figure with an engagement rate of 6.22%.

Till the date, the actress has not been through any sort of controversy that created a buzz in the media.