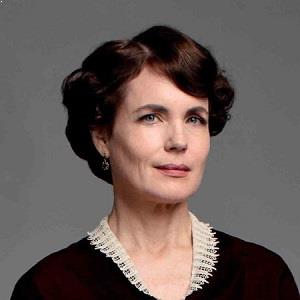 I had reconciled myself to being happily out to pasture, a bit

I'm someone who's done the opposite of whatever the received wisdom is, to keep your career going into your 50s

I turned down the opportunity to be in some films that went on to be blockbusters.

Elizabeth McGovern was involved in a relationship with American Actor Timothy Hutton during February 1982. The pair only dated a month before they eventually separated.

Next, she fell in love with Sean Penn on the set of ‘Racing with the Moon’. The pair decided to take the relationship to the next level and hence got engaged. The relationship, however, didn’t last long. They were together for only a year from 1983 t0 1984.

Elizabeth is currently married. She married British film director and producer Simon Curtis on 12 December 1992 and they have been together ever since.

The couple has two daughters named Matilda and Grace Curtis. The marriage is stable and going strong as no news regarding the divorce or any extramarital affairs is known at the moment.

Who is Elizabeth McGovern?

Elizabeth McGovern is an American film, television, and theater actress, and musician. She has appeared in more than 60 movies and television series.

She appeared in ‘Ragtime’ as Evelyn Nesbit. Additionally, she portrayed the role of Cora Crawley, Countess of Grantham in the British drama series ‘Downton Abbey’.

Elizabeth was born in Evanston, Illinois, the USA on July 18, 1961. She is the daughter of Katharine Wolcott (mother) and William Montgomery McGovern, Jr. (father).

She belongs to a mixed ethnic background of Scottish, English, and German. She has a younger sister named Cammie who is a novelist.

Talking about her education, Elizabeth attended The Oakwood School and American Conservatory Theater in San Francisco. She later dropped out of college when she was studying acting at The Juilliard School.

Elizabeth McGovern appeared in her first film, ‘Ordinary People’, where she gave a start to her career. After completing her education at the American Conservatory Theatre and Juilliard, she began to appear in various plays.

Later, she gave a great performance as Evelyn Nesbit in ‘Ragtime’. In 1984, she starred in gangster epic ‘Once Upon a Time in America’ as Robert De Niro’s romantic interest. Furthermore, she played the lead role in ‘Racing with the Moon’ and ‘Lovesick’.

Elizabeth played the role of Mickey Rourke’s girlfriend in ‘Johnny Handsome’. Later, she appeared as a rebellious lesbian in ‘The Handmaid’s Tale’. She also starred with Kevin Bacon in a romantic comedy, ‘She’s Having a Baby’. Similarly, she teamed with Michael Caine in ‘A Shock to the System’.

Furthermore, in the television world, Elizabeth appeared in a 2006 episode of ‘Law & Order: Special Victims Unit’. In addition, she played the role of Ellen Doubleday in ‘Daphne’. Additionally, from 2010 to 2015, she appeared as Cora, Countess of Grantham, in the British TV series ‘Downton Abbey’.

Apart from her acting career, Elizabeth is also a singer-songwriter. She began fronting the band Sadie and the Hotheads in 2008. Later, the band released an album of songs she developed with The Nelson Brothers.

Elizabeth garnered the prestigious Academy Awards nomination in 1982 for her role in ‘Ragtime’ as Best Actress in a Supporting Role. Furthermore,  in 1982 and 2012, she garnered the Golden Globe Award nomination.

Similarly, she garnered the Primetime Emmy Awards nomination in 2011 and BAFTA Scotland Award nomination in 2015. Furthermore, Elizabeth has won the Screen Actors Guild Awards. All in all, she has a total of 3 wins and 14 nominations to her name.

This actress’s estimated net worth is $4 million. Her movie of 2018 The Wife has collected around $20 million at the box office.

There was a rumor that Elizabeth might be single again. This rumor later turned out to be false. Furthermore, she is rumored to have had plastic surgery at some point in her career.

In addition, her comments on her relationship with Sean Penn as ‘exhausting’ also brought some hate along with her ways.

Elizabeth McGovern is quite active over social media.