Elizabeth Moss is a popular film actress. Currently, she is dating Adam Arkapaw.

Elizabeth is in a relationship as of now. Although she was married in the past, she already is off the hook from that marriage.

Currently, she is dating Adam Arkapaw.

Adam is a talented cinematographer. He has worked on several hit projects like “True Detectives”, “Top of the Lake” and so on. The lovebirds began dating in 2012. As of now, they are living happily sharing an incredible bond between them.

Before this relationship, she was married to actor/comedian, Fred Armisen. The ex-couple first met in October 2008. The very next year they got engaged in January 2009. And October 25, 2009, they shared the marital vow.

The marriage ceremony took place in Long Island City, New York. But after a couple of years of their marriage, they got separated in June 2010, followed by their divorce on May 13, 2011. 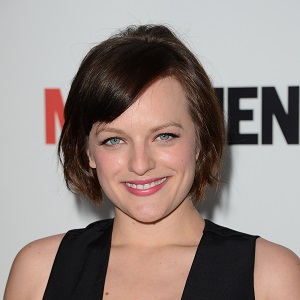 I heard that people were really interested in the new haircut, which I think is so funny. Great haircut, I really like it. It goes great with the time period. And I was super, super, super-happy to have my bangs swept to the side rather than straight in front of me, which I dealt with for three seasons. I'm very, very much done with that

There's nothing like getting yourself into character and seeing a different person. It really wears on your vanity

I think my guideline has been to find things that inspire me. And as long as I stick to that, I don't think I'll have any problems crossing over to becoming an adult actress.

Who is Elizabeth Moss?

Elizabeth Moss is a popular film actress. Additionally, Elizabeth is also a stage and TV actress. She is active in this field since 1990.

She even got nominated for several Golden Globe and Emmy awards for her role in the series, “Mad Men”.

Elizabeth was born in Los Angeles, in the state of California. She was born on July 24, 1982. Her nationality is American and her ethnicity is mixed(English, Swedish, German, Austrian).

Both Ron and Linda were involved in the music industry. They were musicians. During her early life, dancing always fascinated her. Consequently, she did learn ballet at the School of American Ballet in New York City.

From her early life to her teenage period, she studied dancing. Discussing her education, she was homeschooled. Later she graduated in 1999.

Elizabeth’s career started in 1990. At the age of 8, she was featured in the TV miniseries, “Lucky/Chances”. In the series, she played the role of 6-year-old Lucky.

The same year, she also appeared in a TV film, “Bad Girls”. In 1991, she made her debut in the feature film, “Suburban Commando”. Afterward, she went on doing several minor roles in different TV series, and films. She worked hard for bigger roles.

Consequently, she got a big role in the TV series, “The West Wing” in 1999. The following role helped her to gain fame in the entertainment industry. Furthermore, she starred in other hit series like “Mad Men”, “Top of the Lake”, and others.

She even got nominated for several awards including Emmy and Golden Globes for her performances in “Mad Men”.

Presently, she plays the character of ‘Offred’ in the series, “The Handmaid’s Tale”. She is also the producer of the show. Some of her films are “A Buddy Story”, “Chuck”, “The One I Love”, and so on.

Being a talented actress, she is paid a hefty amount of salary for her effortful performances. Therefore, she has been able to accumulate a large amount of net worth.

Elizabeth is an ethical person. She avoids any issues or hot topics that can drag her into controversies.

Therefore, it keeps her away from any rumors and criticism.

Elizabeth has an average height of 5 feet 3 inches. Similarly, she weighs around 49 kg or 108 pounds.

Additionally, she has a body measurement of 30-23-33 inches. Her hair is She has hair color is light brown and her eye color is blue.