Elizabeth Olsen is currently in the relationship with musical artist Robbie Arnett after her breakup with ‘Very Good Girls’ actor Boyd Holbrook on January 2015.

At one time, the relationship between Olsen and Holbrook took a pace and they were engaged but, this engagement could not take a flight and unfortunately, resulted in splitting.

Boyd Holbrook and Elizabeth Olsen were in a relationship for 3 years and it was believed that they are very happy together but, due to some unknown reasons, they were not able to continue. 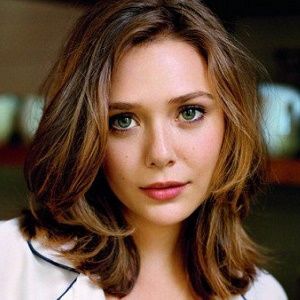 I always went to see independent films, they're the movies I'm usually most excited to see.

If you don't like something, talk about something else that's great and maybe someone else will discover it and think it's great too.

And I think in theater, people don't really focus on the media unless there's a huge superstar doing a play or something.

Who is Elizabeth Olsen?

Elizabeth Olsen is a young and talented American actress who is immensely popular for her work as an actress in some of the greatest hit films including ‘Godzilla’ (2014), ‘Avengers: Age of Ultron’ (2015), and ‘Captain America: Civil War (2016) and was a nominated for ‘Independent Spirit Award for Best Female Lead’.

Born to Jarnette, a personal manager, and David Olsen, a real estate developer, and mortgage banker, during the year of 1989 in Sherman Oaks, California, United States of America, Elizabeth Olsen was raised with her parents for seven years.

As her parents divorced in 1996, she has 5 siblings Ashley Olsen, Mary-Kate Olsen, Trent Olsen, Taylor Olsen, and Jake Olsen among them, 2 are half-siblings.

Mary-Kate Olsen is her sister who inspired and motivated her to be an actress in her future and also gave her numerous opportunities to prove herself.

From a very early age of life, Elizabeth Olsen had a sheer interest in dancing and singing which could be a strong foundation for a successful future as an actress.

So, for the sake of her fostering interest in dancing, singing, and acting, she started training for dancing and sing along with some appearances in her sister’s film.

Talking about the educational background of Olsen, she attended Campbell Hall School in North Hollywood, California whereby, she also completed her high school.

Now, after graduation, she decided to be a professional actress, and to make this happen, she joined New York University’s Tisch School of the Arts and also studied one semester in Moscow Art Theatre.

Achieving a career in Film Industry was not a great deal because she was highly supported by her sisters Mary-Kate and Ashley who gave her some opportunities to play in their movies.

But, the breakthrough she received for playing in the film ‘Martha Marcy May Marlene’ gained lots of appreciation both for her acting and for the movie as well.

She also worked with one of the most demanded directors, Aaron Taylor-Johnson’s Captain America: The Winter Soldier (2014), ‘Godzilla’ (2014), and ‘Avengers: Age of Ultron’ (2015) which was her greatest achievement.

Currently, she is working on the movies ‘Kodachrome’ and ‘Avenger: Infinity wars’ which are about to be released in 2017 and 2018 respectively.

But, this news was denied by Elizabeth in one of her interviews. Moreover, she was also rumored to be in a relationship with Alexander Skarsgard in 2014.

She has light blonde hair and green eyes. Her height is 5 feet and 7 inches. Her weight is 58 kg.