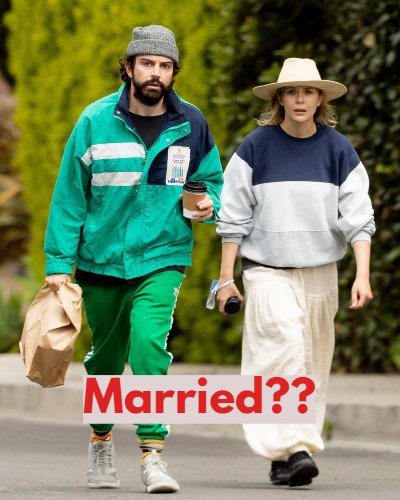 Elizabeth Olsen could not keep herself from calling fiance Robbie Arnett her husband. In a recent interview with Kaley Cuoco as a part of Variety’s Actors Actors series, she was explaining that she had to film in her bathroom due to some construction noise that was coming from her next-door neighbor.

Elizabeth Olsen's husband (who she's married to, by the way) decorated her video chat background for her #ActorsOnActors interview with Kaley Cuoco! https://t.co/Lo40kuI09n pic.twitter.com/rOb7Uqxf68

At the time she praised fiance Robbie for leaving a sweet nod to her hit Disney+ show WandaVision in the background. Olsen revealed,

“I’m in a bathroom. I’ve been in the U.K. for seven months, and I got back two days ago, and my neighbor is doing so much construction to their backyard. I can still hear it, and I’m in the furthest bathroom.”

Kaley also praised the set design and asked what else Robbie does and if there are craft services. She replied,

“God no, I made him breakfast.”

Relationship of Elizabeth and Robbie

Elizabeth Olsen and Robbie Arnett met each other in February 2017 in Mexico where they were vacationing. Just a month later the couple was spotted getting cozy in New York City which sparked their dating rumors. Months after their rumors of dating, the couple went public about their relationship in August 2017.

The couple decided to move in together and during her appearance in The Late Late Show, she revealed that they are living together. After two and half years of dating, they decided to take their relationship forward and engaged in July 2019. He proposed to her with a cushion-cut emerald ring which is surrounded by a halo of diamonds and set on a thin band.

During the covid-19 pandemic, they moved to England. Also, Elizabeth and Robbie are supportive of each other. Their relationship has been going well.

Also read Elizabeth talks about her corset with cleavage in The Avengers 2018 film! Catch the details here!

Elizabeth Olsen is a young and talented American actress. She is immensely popular for her work as an actress in some of the greatest hit films including Godzilla (2014), Avengers: Age of Ultron (2015), and Captain America: Civil War (2016). Likewise, she was nominated for Independent Spirit Award for Best Female Lead. Read more bio…