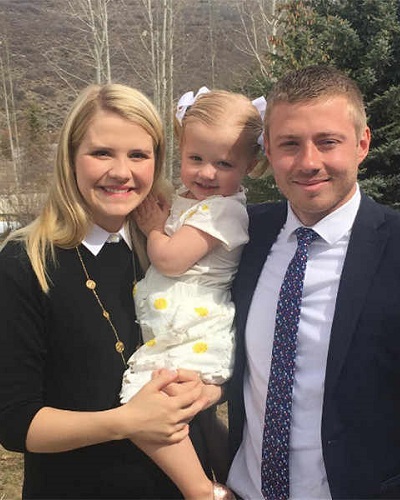 Elizabeth Smart who has rescued in Utah after nine months of captivity when she was just a teenager. It has already been nine years of the case. Since then, she started her life as an inspirational speaker, author, and advocate. She has a happy life with her husband Matthew Gilmour and their daughter Chloe.

Elizabeth Smart met Matthew Gilmour back in 2009. She has a happy family life with her husband Matthew and her daughter Chloe who recently turned two years old(2017).

My cousin @sierracampbellphotography just sent me the finished product of our beach shoot, and all I can say is I’m in love ??? I have so much to be grateful for!

According to the reports, the duo first crossed paths in Paris during Mormon mission trip. Matthew is the native of Aberdeen, Scotland. He first made his impression to Elizabeth as he didn’t recognize Smart as the kidnapping victim from the headlines. In 2012, he said to PEOPLE:

So relieved we finally made it to the U.K. James and I had to travel from Utah through Florida (for work) on to Atlanta, Paris, and finally Edinburgh!!! Nothing as stressful as tight connections with a baby and luggage. But happy to be here!!! All new appreciation for my parents! #momlife

“The thing that attracted me the most to her — at the beginning and now — is how confident she is, especially considering everything she has been through,”

The friendship slowly started to turn to the blossoms of love. Afterward, the relationship started taking the way of love as  Smart went to Scotland to visit Gilmour and he later visited the Smart family in Salt Lake City.

You may like to read Karen Finney, the political consultant! What is her relationship status?

In January 2012, he rose the question on a hillside near her home, with a sapphire engagement ring. She shared the memory of the engagement proposal:

I'm so excited to announce that my second book is going to be released early spring of 2018!!! I have been writing this for the past 18 months, and I have to admit that I'm even more proud of this book then "My Story." I took questions that were commonly asked me when I speak things like, "how have you moved forward?" "Have you forgiven your captors?" "Do you ever feel anger over what's happened to you?" I then interviewed people who I admire, impacted me, or made change in the world, and wrote about my interactions with them, their advice, and my own experiences. It is now available for preorder on amazon!! Yay!!! It is so exciting to see something I've worked so hard on for so long move forward!!!! #wherethereshope #stmartinspress #hope #resilience #anger #movingforward #strength #nevergivingup #people #incrediblestories

“I just said very simply, ‘Elizabeth Ann Smart, will you marry me?’ . And then I wasn’t nervous.”

“They’ve been very happy together. We’re just thrilled. We’re looking forward to her moving on to this next stage and leading a very happy life.”

Though they planned their wedding ceremony for a wedding in Salt Lake, they changed the location to somewhere with special resonance for Smart.

They tied the knot in February 2012 on the north shore of Oahu, Hawaii. It is the same place where she went with her family in the wake of her kidnapping rescue.

At the time, she told to PEOPLE:

“Oahu is a very special place for me, very different than what I was used to. I guess you could say it was kind of a refuge.”

Matthew Gilmour is a former Mormon missionary who is well known for being the husband of Elizabeth Smart who is an American Activist and a contributor to ABC News.

He became known to the public face after his marriage with Elizabeth Smart in 2012. See more bio…