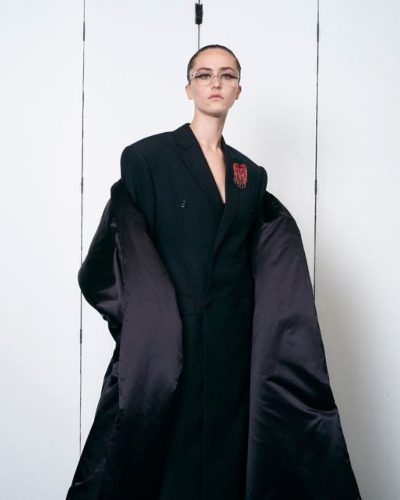 Many people saw the glimpse of Ella’s fashion statement at US president Joe Biden’s inauguration. She is a step-daughter of US vice president, Kamala Harris.

The model has made her debut with the runway of the Balenciaga show in Paris. Ella has also modeled for other big names like designers Lazaro Hernandez and Jack McCollough for New York fashion week.

Emhoff walked on the runway of Balenciaga

Meanwhile, she went for a polished look with her hair tied in a neat bun. This Balenciaga’s Fall/Winter 2021/2022 show was the first haute couture collection in over 50 years.

On the show, the brand showed fragile embroidering evening gowns, stylish oversized casual attire, baggy satin coats, jackets, and jeans. On the other hand, she also shared a glimpse of her runway looks with her fans through her social media. In her recent post, she also thanked the show’s creative directors Demna Gvasalia and Balenciaga. Ella walked down the runway six months after she signed with the IMG model in January. Prior to walking this ramp, she also modeled for Lazaro Hernandez and Jack McCollough for New York Fashion Week.

Details of the show

This is the first Haute couture collection 53 years after the house’s founding designer, Cristóbal Balenciaga, closed his couture business in 1968. The Georgian designer, Demna Gvasalia, revealed an expansive collection of 63 looks. The recent show showed a distinctly modern take on high fashion. It showed a mix of casual garments with formal gowns adding the designer’s signature supersize outerwear.

The show also signed Ella, Kamala Harris’ stepdaughter, for her debut at Paris Fashion Week. There were rumors about Kanya West attending the show as an audience while disguised by a balaclava.

Kerby Jean Raymond, the brand’s founder, and the creative head is the first Black American to get the invitation to show on the Paris Haute Couture.

Ella Emhoff is an artist, designer, and aspiring model. She is signed by the IMG agency after her popularity. Ella gained the limelight after her appearance in the Inauguration on Jan 20, 2021. She went viral after her outfit and playful performance. See more bio…